The Role of Government: Small Public Sector or Big Cuts?

News stories based on statistical arguments emphasise a single fact but may lack the broader context. Would the future involve some more interactive form of media communication? Could tools like Google Fusion Tables allow us to delve into data and make our own data visualisations while discovering aspects of the story we are not told about?

There has rarely been an issue as controversial in economic policy as the role of government. Recently the role of government has been in the heart of the ideological divide of the US presidential debates. While Governor Romney advocates against a government-centred (small government) approach and threatens to undo the role of federal government in national life, President Obama supports the essential function of the state (big government) in promoting economic growth, empowering all societal groups with federal investments in education, healthcare and future competitive technology. 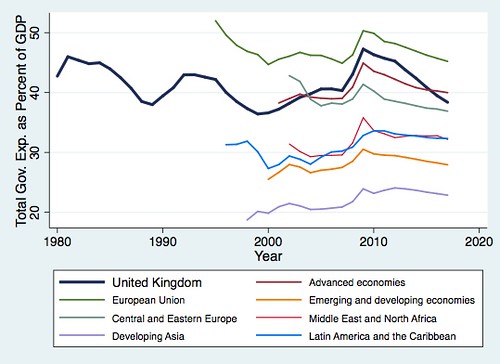 Two weeks ago the Guardian published an article about how the Tory government plans to shrink the state even below US levels, based on the recently-released data from the IMF’s World Economic Outlook. Let’s take the source data and take a look at the bigger picture. On the DataHub, I uploaded all data for “General Government Total Expenditure to GDP” for all countries as well as country groups [See the dataset]. You could use the Datahub Datastore default visualisation tools to build a line graph (select the dataset, then in Preview choose “Graph”) or try the Google Fusion Table with the all countries dataset to select the countries you are interested in exploring.

According to the data Britain would have a smaller public sector1 than the average of all advanced economies by 2017: other country groups are added to show how regions in the world compare (see Graph 1). Even EU countries with staggering public debt – like Greece – would still have a higher relative total government expenditure to GDP according to the projections (see Graph 2). 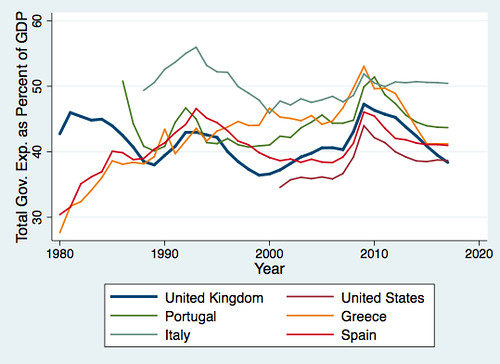 But what is the bigger picture? And does shrinking the role of government in the economy mean that total government expenditures will fall? Not necessarily, because remember that percentages are relative numbers. The growth or decline of total government spending would ultimately depend on economic growth or the increase of the total output of the economy until 2017. If we take the data for “General Government Total Expenditure” in national currency and build the growth rates2, we see that for the UK the growth rate is above zero, meaning that government expenditure would actually increase overtime, despite the diminishing role of government in the economy’s total output.

Debt-ridden countries like Greece, Portugal or Spain (dropping US and Italy to avoid an over-crowded graph) will have to slash spending first before reaching a positive growth despite their larger public sectors. The lesson is that the size of the public sector does not always equate to actual growth in government expenditures. 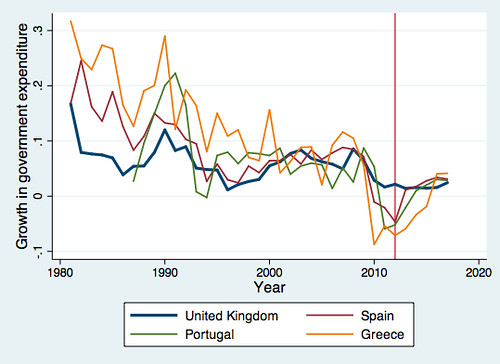 Even if no cuts are actually made, the public sector will eventually shrink: For example inflation could mean that the government will actually spend less in real terms. A smaller public sector in the long run will eventually mean that countries like UK will not be able to support an aging population or provide the same levels of infrastructure and public services as currently used to. Yet smaller public sector might also provide an opportunity to cut taxes, provide incentives for the business sector and boost economic growth. Policy choices about the size of government following the US presidential elections and the sovereign debt crisis in Europe would partly be choices of ideology, as it there is no clear evidence which recipe works for an individual case.

In the next piece in this series, we will look at some of the detailed data available on government staff salaries around the world.

1 The size of the public sector is measured by the percentage of total government expenditure in GDP.
2 How do I build growth rates? Add one column where you build natural logarithm of the absolute expenditure numbers, add another column where you lag all observations by one year: shift the entire column down by one row. In the third column take the difference between the current year logarithm and the lagged value. Growth rate = ln (xt) – ln (xt-1)

Velichka is Project Coordinator of Open Economics at the Open Knowledge Foundation. She is based in London, a graduate of economics (Humboldt Universität zu Berlin) and environmental policy (University of Cambridge) and a fellow of the Heinrich Böll Foundation @vndimitrova