It’s October, which means it’s time for Mozilla Festival! The annual event that is hosted by the Mozilla Foundation is now in its 5th year, and it just keeps getting bigger. The festival took place at Ravensbourne College in London on 24-26 October 2014. Occupying the whole 9 floors of the Ravensbourne building, and with 11 tracks to choose from, the festival this year attracted more than 1600 educators, collaborators, developers, and enthusiasts working towards an open and creative web. This year, the Mozilla Foundation generously supported the School of Data team to conduct sessions regarding data as part of the Science and the Open Web track, which were “Dealing With Messy Data” & “Analyzing Data Using Spreadsheets”. Without giving any too many spoilers away, it was a blast!

The first day of MozFest was the opening night with the science fair coming in with a full entourage. There was an airblimp, digital guitar, particle shooter and much more! Of course, we had a school of data table at the fair (shown below), together with the Mozilla Science track section and together with the very nice people from the OpenScience. 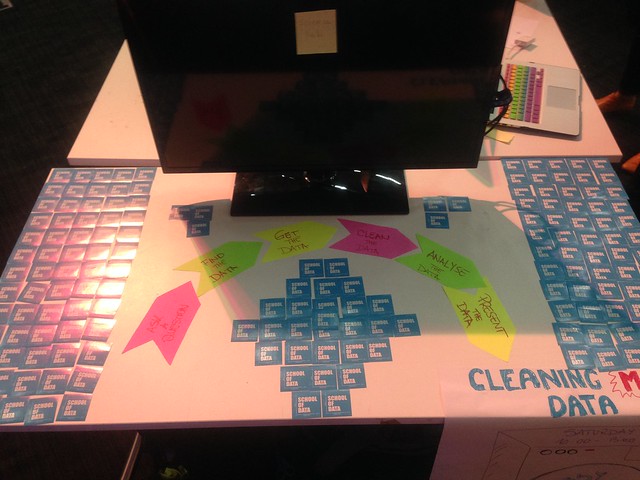 The second day of the Mozilla Festival (which is actually the first “main” session day) started with opening talks. Then, the sessions started in earnest, and we held our first School of Data session at the Mozilla Festival! Our session was in the science track on the 7th floor, and to start with, we did a session titled “Dealing with Messy Data”. 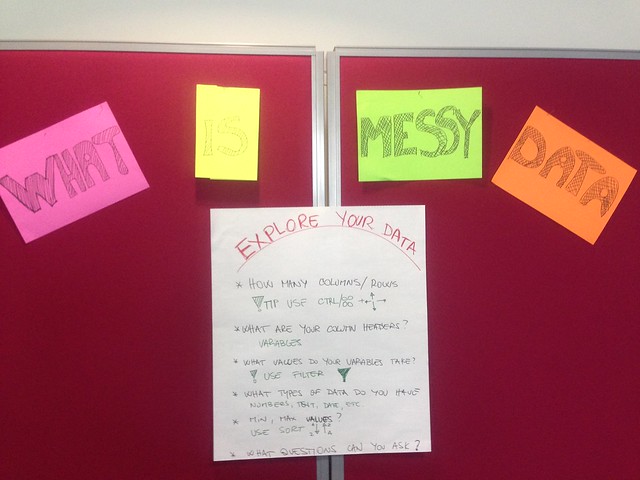 As with the title said, this session is all about messy data. We had about 30 participants in this session, and after some group exercises, we asked questions to the participants, such as: if data were an animal, what kind of animal would it be? A lot of interesting answers came up, including one saying that data was like a mythical beast. Next, we split the participants up into groups, and started hacking on messy data.

First we gave them a dataset (a messy one of course), a lot of post-its, and we gave them time to see what it is that made the data messy. After a lot of post it stacks later, we finally gathered around and made this very nice wall of post it full of messy data elements. 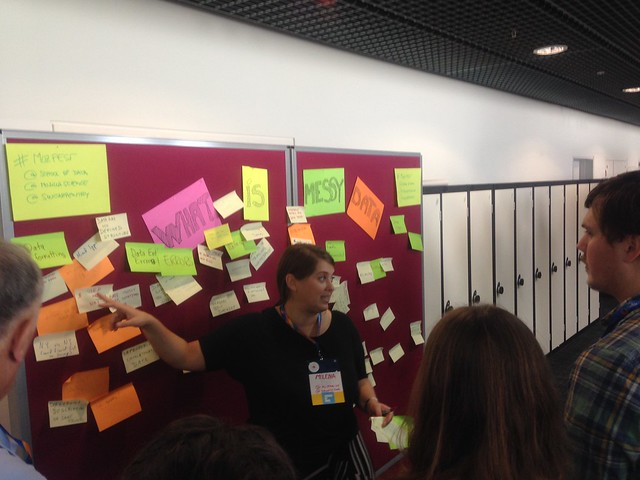 With the messy data element properly explained, it was then time to get hands on, technical style with the messy data! True to MozFest collaborative spirit, we got a lot of help from various people such as from Software Carpentry & ROpenScience, so we had about 6 tables, each of which were focusing on a specific technique such as Open Refine, R, Regular Expression, and Python. It was really great and we learned a lot – we hope our participants did too!

But this was just the start of the School of Data team adventure in MozFest;stay tuned for the report of our second session, Analyzing Data via Spreadsheets, in part 2!