National Training on Working With Data For Extractive Industries in Indonesia 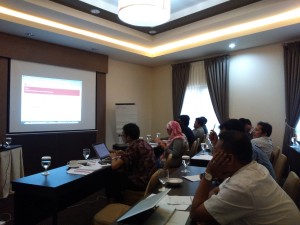 Following on from the Capacity Building workshop held in September 2014 with Publish What You Pay Indonesia (PWYP Indonesia) and supported by South East Asia Technology & Transparency Initiative (SEATTI) – HIVOS, at the beginning of October, I helped lead a a two day national training regarding extractive industries data for CSO in Indonesia, with the same audience. Done in parallel with the national work meeting of the PWYP Indonesia coalition of CSOs, the training was focused on raising awareness of data usage and giving the basics on how to work with data for CSOs in the extractive industries sector in Indonesia. The two day training attracted 20+ participants from various CSO that joined in the PWYP Indonesia coalition and by the end of training we hoped they would have their own data project to continue working on.

The first day was dedicated to learning the basics, and the theory! In the beginning, the participants are being given the rough theory and basic stuff on how to work with data & data usage, that is based primarily on the School of Data’s data pipeline. The concept of data work in the pipeline (asking a question, finding data, getting data, cleaning data, analyzing data, and visualizing data) also became the building blocks of the training.

After the participant got a heavy dose of the basic stuff regarding how to work with data, then we went straight into the technical how-to’s, and got their hands dirty. We talked about how to finding data using Google’s advanced search, using the newly launched Indonesian Data Portal data.id, how to create their own forms using Google Docs, and how to get data from PDF using tools like Tabula. After they got their hands full of finding & getting data, then we went to the next step of cleaning data by showing them what we mean by ‘messy data’, and exactly what kind of clean data that they want to achieve in order for the data to be usable, and re-usable by others.

As a session bonus in the end to close the first day, the participants were given a sample demonstration on how they can easily analyze their social media data using Wolfram Alpha. It was really a lot of stuff to chew on the first day, because it was so full of the basics, but the participants felt excited, and a silver lining that can be taken from this session is that actually a lot of the data pipeline concept has already been done by the CSO in their everyday work; the only difference, however, is that they weren’t (yet!) understanding it in terms of the big picture. To understand their work flow better, looking at it through the ‘data pipeline’ framework really helped.

On to the second day!

The second day was done in parallel with the PWYP’s national seminar, and the data training track was put after the keynote and panel discussion regarding transparency in the extractive industries area. Even though the data training session was optional, and scheduled for the afternoon, this did not hinder the energy of the participants of the data training. The session was just packed as the first day’s session!

The materials for the second day focused more on the actual implementation of the theory of the data pipeline that we went through on Day 1. The participants were introduced to the concept of data visualization and the tools that they can use for visualization, then using these tools and everything that was covered on Day 1, they were encouraged to try and create a data project plan using the pipeline as a template.

As always with visualization, the participants were very interested and active in this session. Inevitably, we had a couple of minor glitches regarding internet connectivity, and it came up that some of the visualisation tools that we recommended actually needed an internet connection, but nevertheless the the session turned out nicely offline. After the “Creating your own data project” session facilitated by the PWYP Indonesia team, there was much discussion – which even continued after the time for the training has ended. Such incredible energy for data training!

Overall, there was a lot of interest in the technique of how actually to work with data, and how the usage of data can help the CSO groups to improve their advocacy work. This was great to see – because once you start to learn that data can help you, you will be hooked to learn more and more about data and how to work with them :)