Instigating the Rise of Demand for Data: The #OpenData Party in Abuja

So what happens when you have 102 Nigerians representing all the six regions of the country in   Abuja to teach and learn about what they can use data or open data for? “It was an action – packed, idea generating, brain storming, mind grooming which will help me in my advocacy as well as in tracking how the budget of my country is being spent, a challenging and yet fun – filled event” as described by Clinton Ezeigwe of People to People International; “As someone working in a non-government organization, this event has boost my knowledge on data sourcing, data collection, data analysis, and will help me in mapping my work environment” informed Aniekan Archibong of Partners for Peace in Akwa Ibom state. 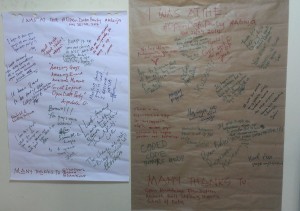 What participants said about the 2 – day event

In a 2 – day event on Friday, November 28 and Saturday 29, 2014 at the African University of Science and Technology, that was meant to raise the awareness on how NGOs can use available data to monitor service delivery in the health sector; empower journalist on using data for creating compelling stories that can cause change; and in all create a platform (on-the training) that can be used to monitor service delivery in the health sector. “We will be most interested in how citizens turned professionals like you all here, can take up stories from the data that will be curated during this event, in asking government questions about inputs in the health sector, and other sectors as well” said Christine K, Country Director of Heinrich Boell Stiftung Nigeria, during her keynote at the event.

In the minds of many participants was how we fit into this new world of Open Data with a party at the end. Did you ever wonder why the party? Well to clear the air, we started the “party” helping participants to know what data will mean to us, they as participants, and what it can change in the life of that curious woman that walks 30km from Keta to Goronyo to join an antenatal care program; what it meant for that hardworking man to transit from Potiskum to Kaduna before he can get a Hepatitis C viral load test, even though he had to borrow the 23, 000 Naira meant for this test. Yes, available and structured data can create a great story out of this recurring event.” If you are still looking for what could then happen from the gathering of these 102 participants – it’s all written in gold here, even though these are still stories in the making, but we can do much more” exclaimed Anas Sani Anka of the Nigeria Television Authority in Gusau, Zamfara 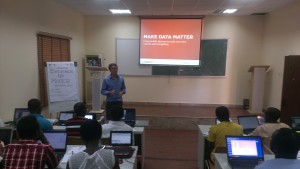 Going through the data pipeline (data sourcing, collection, collation, analysis, reporting and use) surprisingly, we got this shock again! Only 2% of the participants knew where to quickly find the available data of the federal government budget in Nigeria. Whilst data pipelines was meant to guide participants through the data management processes (in a participatory manner) it was another opportunity to share where the available data are online in the country, and how they can be used in advocacy and storytelling to start conversation around transparency and accountability; and also in exchanging feedbacks between the people and government.

Leading the skill share session was Adam Talsma of Reboot taking participants through using formhub and textit and Michael Egbe of eHealth Africa introducing participants to how they are mapping Nigeria using Open Street Maps. The storytelling sessions had Tina Armstrong, an award winning data journalist that is interested in telling stories of vulnerable communities using data; Joshua Olufemi shared skills and tools that has made Premium Times the best online investigative media in the country; while the session was rounded up by Ledum of Right to Know, showing participants how to enact the Freedom of Information Act in getting data from the government. 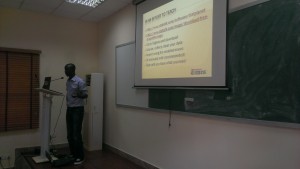 The high point of the first day was the, I want to learn, and I want to teach session – a remix of the School of Data Summer Camp World Cafe and Skill Share Session. “Learning particular skills in 10 minutes can be mind blowing and something I will not want to forget in a long time, I only hope we could have had more time other than the 30 minutes for the 10 min/skill session” narrated Michael Saanu of Africa Hope Foundation. Amongst skills that were taught is using Microsoft Excel for analysis, creating Survey form using Google Form, collaboration techniques with the Google Drive, writing funding proposals, community building, using Twitter and Facebook for advocacy, data scraping using Tabula amongst others. After this session, it was clear that participants wanted to be part of all the sessions, but they were only limited to three, as the night crept in faster than we expected – what an energetic way to end the first day! 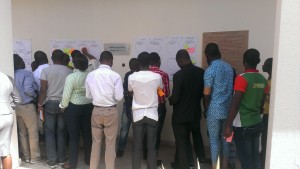 Kick starting day 2, with the sun and expectations so high was lessons from participants, and an ice breaker on the power of around leadership. This day was dedicated to Open Street Maps and Data Sprint on Funds meant for inputs in the health sector. Moving from scraping the data from the budget office to visualizing it, and creating a monitoring instrument amongst the participants. Working through the available health facility data for Goronyo on NMIS data, we found out that some Goronyo data were not accurate –  So if we can’t use that, how do we get the government health facility data – most participants of this group concluded that the dhis2 data could be more reliable but its usage still remains difficult! Anyone wants to help in getting Goronyo health facility geo-referenced data? Please comment here. Not giving up, Sidney Bamidele of eHealth Africa trained participants on how to add, and edit points on open street maps and how to create task managers on HOTOSM. 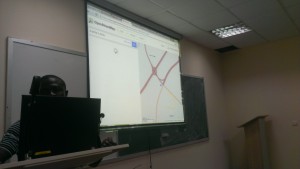 Nevertheless, the data sprint with music, and drinks took the whole day, and I couldn’t stop hearing – OMG! So 20 million was budgeted for the construction of this health facility in my LGA, how come it is still at this state, I think we need to go and ask”; “I have found that so many time, descriptions of budget data has been duplicated – and how do we stop this”. As it has always been, only one sprinter had an apple laptop out of the 50 laptops on the tables; Most of the participants agreed that only 30% of Nigerians own a smart phone, so how many will used it, and how many will use an android or that new android app you are about to make? Maybe the feature of mobile activism in the country still lies in feature phones. These and many are conversations that always ensue during training and data sprint sessions I have facilitated. At the end what did we make – an Ushahidi Crowdmap instance of where funds for health input will go? a first step in starting a conversation around monitoring service delivery in that sector. 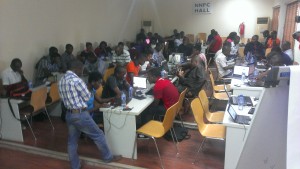 Participants during the Mapping and Data Sprint

What next? in the words of the Hamzat Lawal, the Chief Executive of Connected Development [CODE], it is important that we brace up, and start using the data on this platform in asking questions directed not only to the government on if budget data description got to citizens it was meant for, but also to citizens it was meant for – on facility and health input usage and quality. As a School of Data Fellow, I have learnt that citizens need basic tools and skills to hold government accountable. As a monitoring and evaluation expert, I can see that in few years, lots of data will be released (even though most wouldn’t be responsible), but how citizens will identify and use the reliable ones remain a herculean task. As a human being, I learned how hardworking and brave my colleagues and participants are. At no time did I feel that facilitating data trainings was futile. Ultimately, what I really learned about data, or open data, or available data is that the NGOs, journalist, activist and governments still need more capacity building around this phenomenon.

← Data 101 Knowledge Sharing with Publish What You Pay Indonesia
Code For Bandung – What, Why, and How to Work with Open Data →