Data journalism in the Philippines: changing the open data landscape in the country 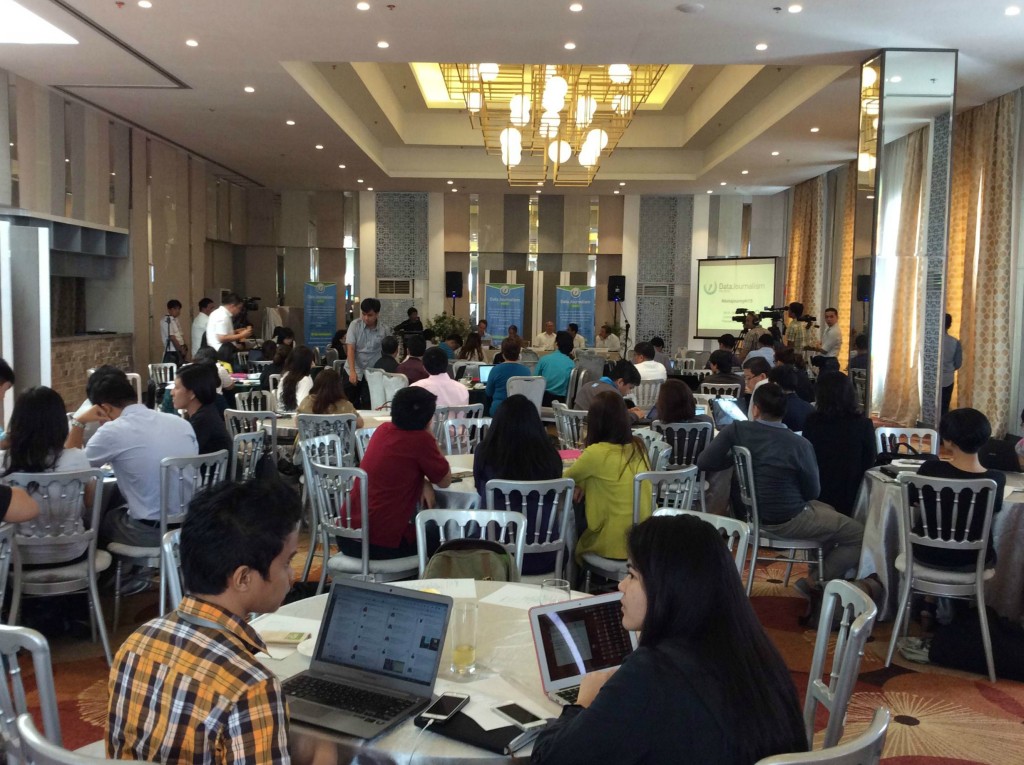 Transparency, accountability and open data in the Philippines have just become more palpable to citizens and journalists alike. Open Knowledge/School of Data joined forces with the World Bank and the Philippine Center for Investigative Journalism (PCIJ) to launch a five-month training program for 34 journalists from 12 media organisations in the country. The program was kickstarted this morning in a convention in Manila, with strong support of the Philippine government.

The event gathered 87 people from all over the country and discussed the challenges and the potential collaboration efforts between civil society and the government to make the Philippines more transparent and accountable through open data. The panel was lead by Malou Mangahas, executive director of the PCIJ, who reflected on the timing and relevance of the program to the Philippines, because of the coming elections. “We’re facing big changes in leadership in the country and we need to think about the way we do conversations around public policies”, she said. “Data could be the narrative that binds us all”.

The Philippines has made remarkable efforts in recent years to open its data. In 2010 the government made a commitment to characterise itself by transparency and accountability, leading to its participation in the foundation of the Open Government Partnership in 2011 with seven other countries, including Brazil and the United States. Within the country, the most visible impact of that commitment was seen two years later with the creation of the Open Data Philippines and its Open Data Portal in the 2014. “The goal is to have more than 2000 datasets published by the end of this year”, said Usec Bon Moya, who leads the Open Data Task Force. Moya admits the number is still “a drop in the ocean of Philippine data” and welcomed the contribution of journalists and civil society activists to help the government find the data that is relevant to all stakeholders. “We need your input to make our data more consistent and publish more datasets”, he said.

” What happens when you have democracy but a weak state? You got captured by politicians.” Rogier van Den Brink, World Bank #DataJournPH15

One of the issues acknowledged by the panel is the hard time professionals and citizens have to understand and work with data. A lot of times stakeholders don’t have a clear grasp of how the government works. Commissioner Heidi Mendoza, from the Commission on Audit, said one way to tackle this problem is to engage citizens to work with the government in a participatory process, like the Civil Participatory Audits. “When citizens work together with auditors, they feel stimulated to get to know more the government and its programs”, she said.

“The first step to achieve transparency is to show everybody we have nothing to hide”
Keneth Abante, Department of Finance, Philippines

It goes a long way if the government itself is willing to open its data, regardless of public pressure. Kenneth Abante, from the Department of Finance knows that and showed the audience ways journalists can help the office identify frauds and get smuggles just by analysing the data they publish. “The first step to achieve transparency is to show everybody we have nothing to hide”, he said. “We release every week and month important data that can be mined by journalists and activists.” To have a taste of how to take Mr. Abante’s invitation seriously and actually find stories in data that is already published in the Philippines, Kai Kaiser, senior economist from the World Bank, walked through a mini-data investigation. Using open data about tobacco, Kaiser raised questions about components that are imported to the Philippines and the relationship between the values declared by importing companies and the actual prices in the market. “That’s how you can find holes and corruption in the system”, he said.

Mendoza: if COA talks to citizens, they often get intimidated.But if an active citizen asks same Q, citizens willing to talk #datajourn15ph

Kaiser’s example was picked up by Rogier van den Brink, also from the World Bank, to show how the concept of Open Government can lead to better democracies and better relationships between governments and its citizens. Nevertheless, Mr. Brink reminded the audience that transparency is not enough. “The idea of open data is potentially transformative, but more needs to be done”, he said. “We need to collect and give feedback at all times and we also need to follow up on our initiatives.”

After the conference, the 34 journalists will participate in a 3-day hands on training about data analysis, cleaning, scraping and visualisation. The workshop will be lead by our own Sam Leon, School of Data trainer and data analyst. The training is just the beginning of a 5 month process in which the journalists will have conference calls with Open Knowledge/School of Data to help on their data investigations. Ideally each group of journalists will have produced a data driven investigation by the end of the program using the skills and tools presented during the workshops and mentoring sessions. “We are very excited and looking forward to see which stories are hidden in the Philippine open data landscape”, said Sam.

← Analyzing regional data: Data Expedition in Costa Rica
Data+Drinks : a meetup to engage the open data community in the South of Nigeria →