You are browsing the archive for Jacopo Ottaviani.

“Is it really worth it?” – The map of Italian journalists facing threats

A data journalism project by three Italian freelance journalists and developers shows the problem of journalists facing threats in Italy.

More than 300 journalists have been facing threats in Italy in 2012. This is what emerges from the data journalism work by three Italian journalists and developers, Isacco Chiaf, Andrea Fama and Jacopo Ottaviani, who published a cross-platform project that gives a snapshot of the phenomenon.

An interactive map represents the cases recorded in 2012 across Italy, giving a top-down view of the phenomenon. Threats are clustered on the basis of the type: Intimidation (104), Legal actions (63), Assaults (16), Malicious mischief (12 cases). 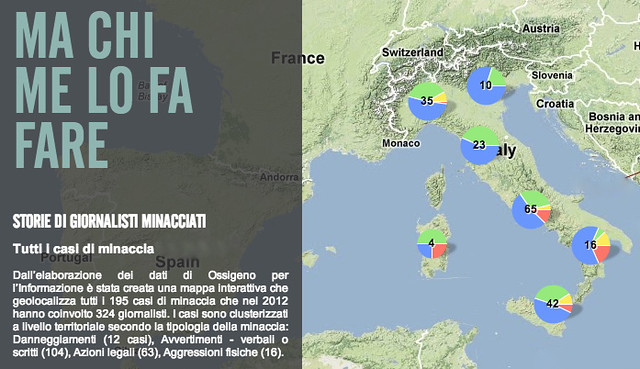 A batchgeo map traces all the cases of threats that involved 324 journalists just over 2012.

A more detailed perspective comes from three individual cases of threat that have been represented through timelines including audio, video and other multimedia contents. Through these timelines it is possible to explore unreleased interviews, original documents underlying the investigations, features from the news and the media and to share them across the social web.

Two more maps show the density of the phenomenon at the regional level, focusing on the numbers of cases of threat and journalists involved. The regions recording the most threats are the southern Sicilia and Calabria.

The project is based on the data by the observatory Ossigeno per l’Informazione (oxygen for information) which has been monitoring the phenomenon of Italian journalists under threat for years now. In its annual
reports Ossigeno sheds a light on the situation, recording single stories of threats and aggregating the whole dataset.

The project was born during the DiGiT conference on New Media in Florence, Italy, in July 2013, from an idea of Andrea Fama. Andrea invited me and Isacco to hold a keynote speech on data journalism. In the end of the speech Andrea told us about the idea of building a new narrative representation of the Ossigeno’s data on threatened journalists, by building a set of maps and timelines. In six months we entered in touch with the observatory and built up the whole project, also with the support of ahref foundation that financed our work with a grant.

The team consisted of three people coming from three different backgrounds: a data journalist/computer scientist, an artist/designer and a journalist/editor. The three of us share the passion of storytelling and civil
journalism. A rational division of roles led the collaboration. However, everybody could give his contribute to the others’ tasks. The team worked very well and we are currently thinking of making more projects together.

Our suggestion to people who would like to develop a similar project is to specialize in their field without forgetting to study all the rest. For example, it is good for programmers to learn how to write and for journalists to learn how to code. By blurring the borders between different skills and backgrounds it will be possible to innovate the media. Computer scientists, journalists, statisticians, designers and illustrators should learn to work together and influence each other. Data journalism is also a consequence of this blend of skills and experiences.

GiornalistiMinacciati.it is available both in Italian and English. An infographic that summarizes the whole results is also available.

Comments Off on “Is it really worth it?” – The map of Italian journalists facing threats