You are browsing the archive for Lisa Evans.

We recently ran a tax avoidance/evasion data expedition. It was run online over the course of the afternoon. Our aim was to provide a good grounding in tax topics for someone new to this complex subject, complete with links to data sources. To do this we put together a decision tree of tax avoidance and evasion topics.

The first decision people had to make was to pick their question: would they choose between illegal tax evasion and morally questionable tax avoidance. If they picked the tax avoidance option, we then fleshed it out with examples of known schemes and measures governments have taken to close that tax loophole. The tax avoidance route gives very specific cases of individuals wanted by the law for unpaid tax and, in contrast, country level measures of shadow markets. There was also the option for participants to choose a project of their own.

There were three groups in the afternoon, two of them chose to explore shadow markets and one picked their own topic of looking for patterns of company structures in the open corporates database that might indicate tax avoidance. The two shadow market explorations were quite different, one looked at the relationship between estimates of the size of the shadow market and the gross domestic product (GDP) for a wide range of countries, the other looked at USA, state by state, measures of shadow markets. 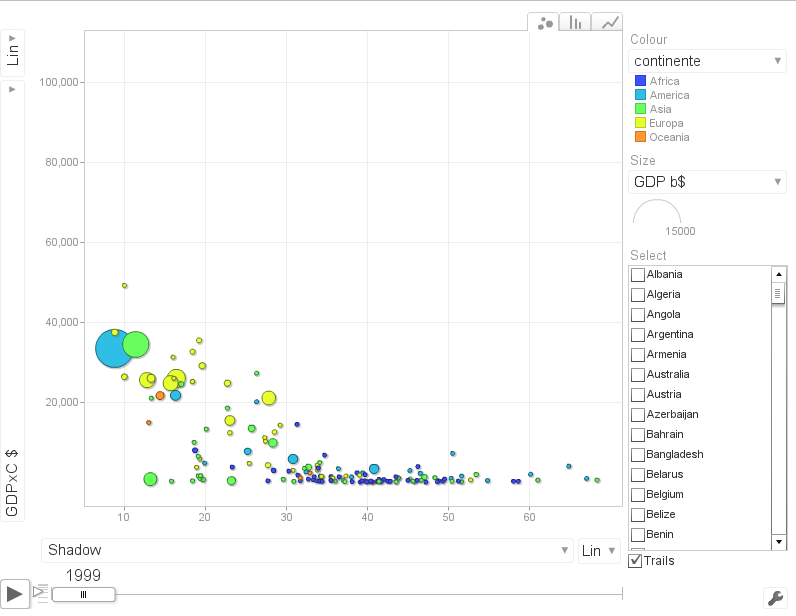 The data visualisation produced by a group exploring the relationship between shadow market size and and GDP throughout the world. There is an explanation of this data (in Spanish) here.

Each group was asked describe difficulties they had with the data. The group exploring shadow markets and it’s relationship to GDP picked a measure of the shadow market from the The Institute for the Study of Labor and the OECD for the GDP data. The difficulty this group had was matching the two data sets; getting them both in the same format and then matching by country name.

The group who looked at shadow markets in the US were challenged by finding the most reliable measure of a shadow market that was as granular as possible. First the World Bank report on shadow markets was considered but to understand the methodology would take too long for this quick challenge. The group decided to focus on two measures Currency in circulation and Numbers of households without bank accounts from the FDIC. Spreadsheets in excel format were found for the latter that were over-formatted and contained troublesome image file headers. However the group tidied up the data in the course of the afternoon. The group also noted the FDIC data was only by state, not by census tract (a more geographically detailed measure), they concluded that in general, working at the state level doesn’t give a really clear portrait of circumstances. Another potentially useful source was BankOn’s analysis that extrapolates a percentage of unbanked tracts with a detailed methodology. The group also considered combining the Gini index into their work which is available on a metropolitan area level but it grouped up to a state level

The group who looked at patterns that might indicate tax avoidance or evasion in company structures found a couple of difficulties using Open Corporates: OpenCorporates API was rate limited (which was a problem for the afternoon but easily resolved by talking to the Open Corporates team who were very willing to help).

They found the OpenCalais API for identifying companies in the officers names was breaking frequently as they were using it. The group dug deep into the rules for setting up different types of organisation in the Isle of Man (where they considered prototyping this project) and the UK. This is a very dense area of research and the group made a good start throughout the afternoon.

The groups all found they needed more time to research the specific areas of tax they chose to investigate so it is recommended that in future tax expeditions are run with at least one tax expert in each group, ideally a forensic accountant for spotting patterns in company structures and an economics expert from maybe the World Bank or Bank On for the US shadow market project and a software expert or statistician for the world wide shadow market study.

So we thank all the participants for a great afternoons work and we look forward to using this experience to design data expeditions that more closely fit your requirements.

Interested to hear when the next data expedition will launch? Join the School of Data Announce list.

Comments Off on Tax Avoidance and Evasion Expedition: Looking back 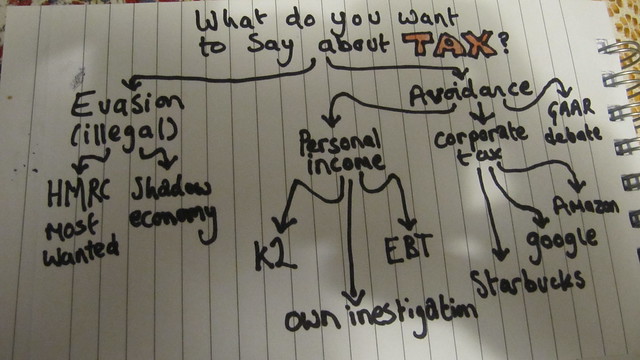 Want to dig deep into tax avoidance and evasion? We have gathered a wide range of data on this sensitive topic and for one afternoon we we’ll guide you through some of the key decisions to think about when writing a story on the topics. With tax evasion and tax avoidance currently such a hot topic in the media, it’s crucial that people can understand the difference between the two terms as well as the mechanisms by which they happen.

We’ll be looking for projects such as:

Please note that limited space is available. For more information about the Data Expedition format, we encourage you to read this article.

How can I participate?

To get involved either:

Aims of the expedition

We will aim to give people:

How to get involved

Please make sure you are registered here and that you select “Tax Avoidance/Evasion” in the “I’m Interested in…” section. Please note: you will need to be available for at least 3 hours during the expedition period and spaces will be limited, so preference will be given to those who can definitely commit to the expedition. Spaces will be confirmed shortly before the expedition.

Stay up to date with the latest data expeditions

Want to be informed any time there is a new data expedition? Join the School of Data announcement list to get notifications of the expeditions as soon as they are announced!