Introduction to aid data: what is it, where is it?

Welcome to the world of aid data! In this first module, we’ll be starting from first principles: what do we actually mean when we say ‘aid’, and why is looking at aid data important?

Also, bear in mind that aid is just one of many financial flows going in (and out) of low-income countries, and it’s important to contextualise it amongst the wider ecosystem of financial flows before drawing any major conclusions.

Aid isn’t just cash from government to government, though – it comes in lots of different forms. Sometimes, it is transferred to poorer countries as cash, or as food or commodities that they need; but some of it never actually leaves the donor country, and is used to help citizens of poorer countries, like students, or refugees (or, more controversially, on development consultancies in donor countries)

Bilateral and multilateral disbursements US$ billions, 2011 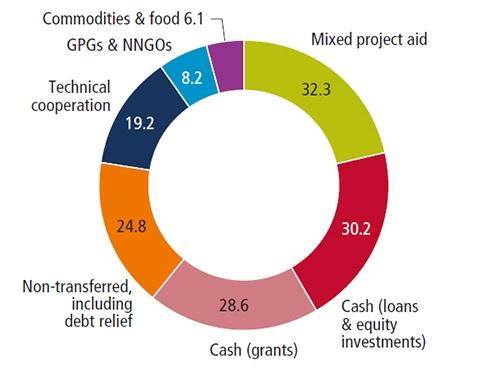 The way in which different donor countries actually give their ‘aid’ varies greatly; for example, some focus on debt relief, others on trade.

Watch out: last year, researchers found that over $22 billion of the $100 billion plus which was reported by donors as bilateral Official Development Assistance never reached the developing countries; so, bear this in mind when thinking about financial flows that are, (in theory) going to developing countries

Broadly speaking, aid can be split up into two different types: development aid, and humanitarian, or emergency, aid.

Development aid is aimed at alleviating poverty in the long term; there are many different types within this, like budget aid, project-specific aid, and charitable aid, for example. We’ll go into these in more detail in a future module. By its very nature, in theory, being planned in advance, there is much more data available about this type of aid.

Humanitarian, or emergency aid, is focused on the short term response in times of emergency; naturally, there is only short-term data available on this, and naturally no forward-looking data, as it is organised at short notice.

To provide a little bit of context: OECD countries have set a target of providing 0.7% of their Gross National Income as ‘Official Development Assistance’. This target was set back in 1970, and reaffirmed multiple times since then; however, this doesn’t mean to say that all countries are meeting it, even 40 years later.

Here’s an embeddable, interactive chart showing how they’re doing at hitting that target, from the OECD.

It’s also worth noting that the public in many donor countries tend to wildly overestimate the amount of money that their government is spending on foreign assistance; for example, a study from 2013 showed that Americans estimate that 28% of their budget is being spent on foreign assistance. In actual fact, it’s less than 1%.

How is aid data made available? 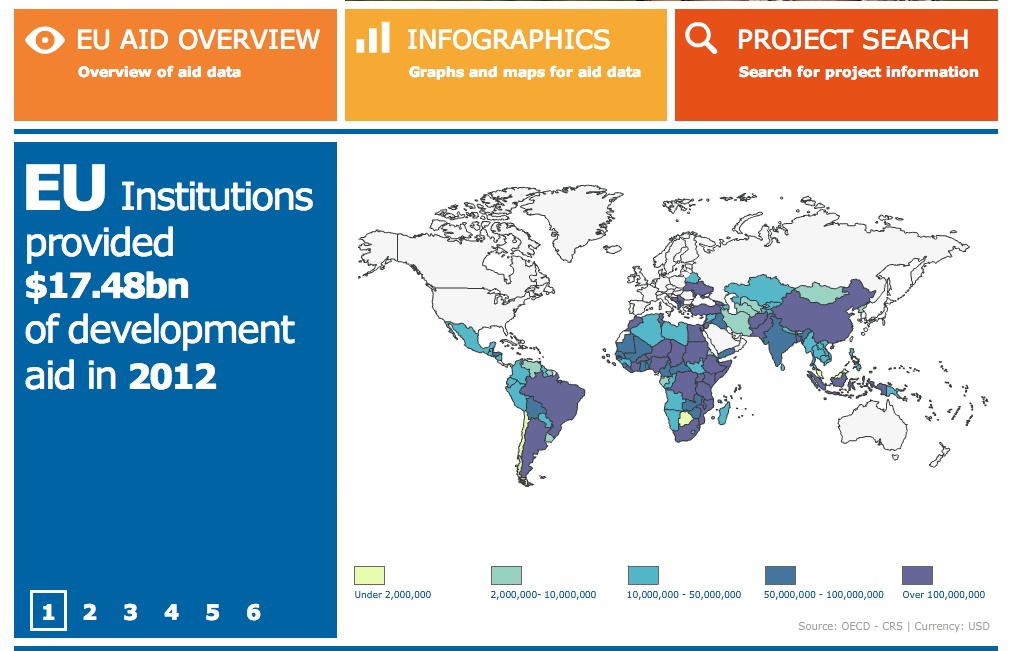 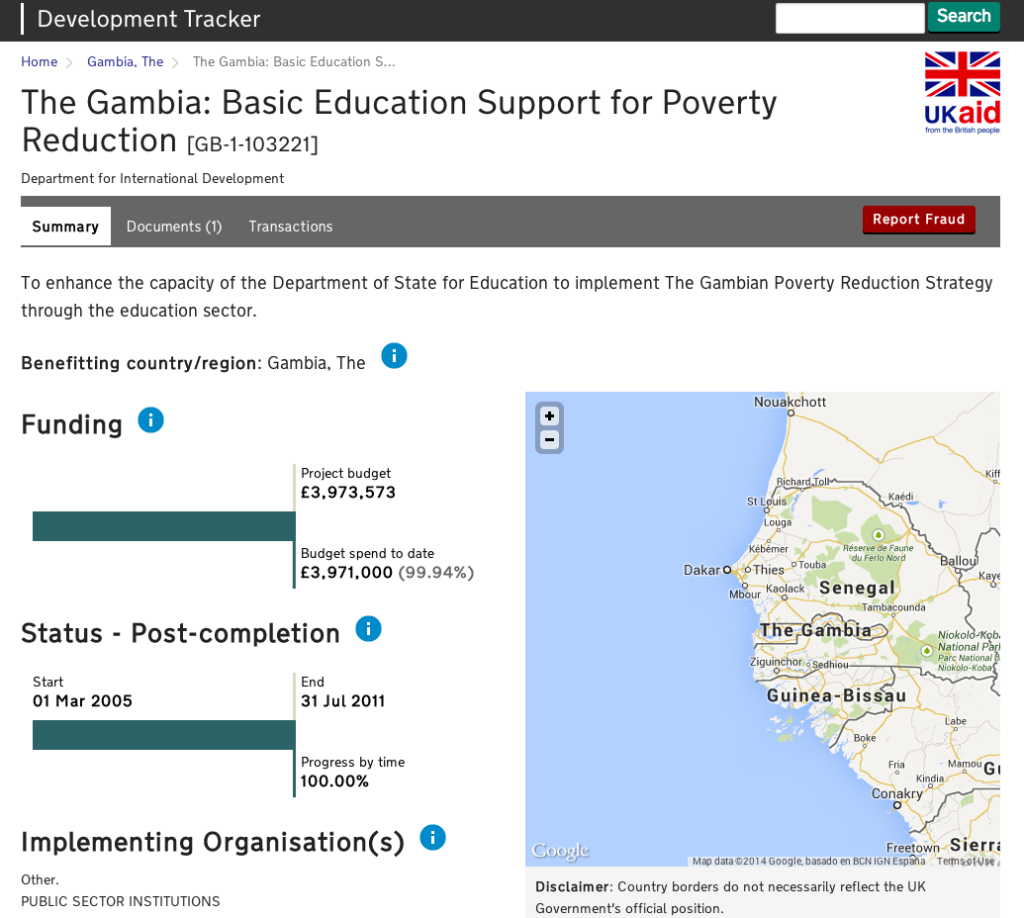 Project level information can also be useful to see in other ways; below is a map of Bangladesh, showing just projects from the World Bank. It really hits home how many there are, when you can see all of them at once (especially when you bear in mind that this is just from one donor).

Sometimes, you also have the option to change the ‘base map’ to show, for example, maternal health, or literacy rates. It can be interesting to compare whether these **development indicators actually correlate in any way to the projects that are taking place in those areas. For example — are projects addressing education actually taking place in areas with low literacy rates? 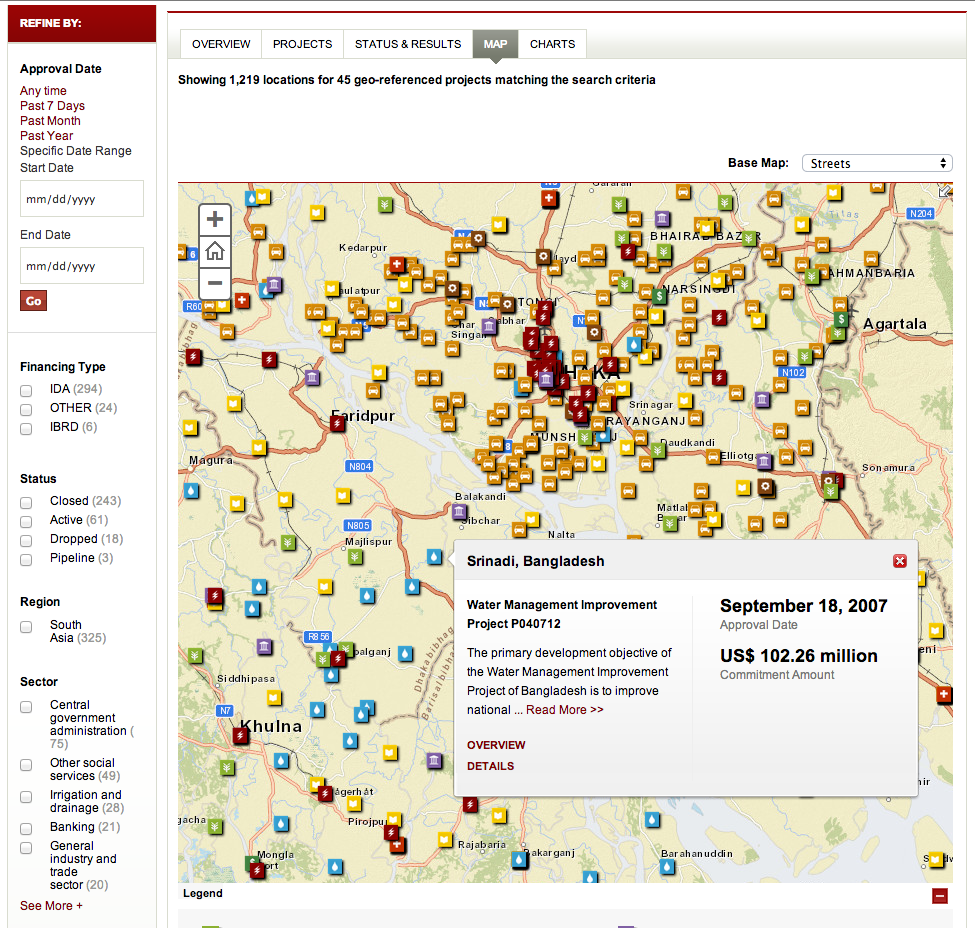 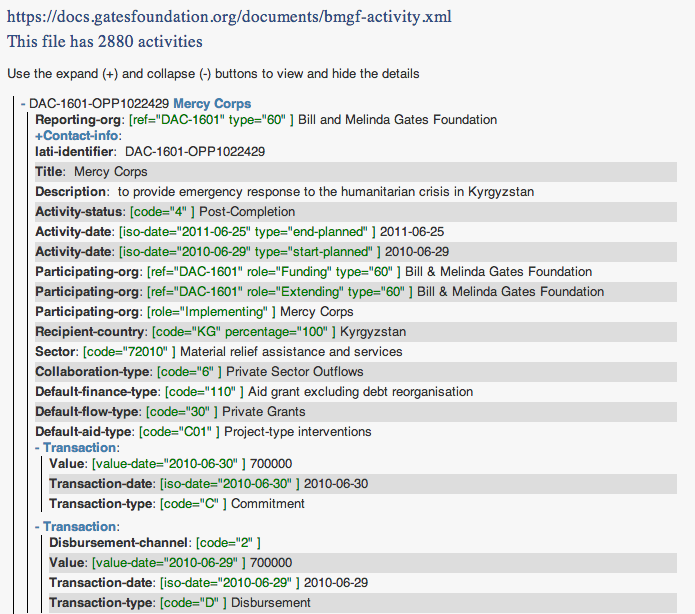 There’s lots of detail in the picture above which might not make that much sense, yet! But don’t worry – it’s just as an example to show what kind of data you can get.

Where is aid data made available?

There are lots of different ways in which aid data is made available; some, through online portals which allow you to view rather than download the data, and others as raw data, as mentioned above. Through the Tools section on the site, we aim to make it as easy as possible for you to find what you need.

Here are some of the most most useful places where you can find different bits of aid data and information.

Both of these sources are available through their Query Wizard for International Development Statistics (QWIDS) tool, where you can find data reported from all of the 29 DAC member countries to the OECD, with regards to their activities as classified to be ‘Official Development Assistance’.

There are lots of data portals which use IATI data, if you’d rather browse through it via a more friendly user interface- we’ll go through those later.