School of Data teaches data skills through exploration. We believe the best way to learn is by working through datasets which have relevance for you personally. We’re looking for people with a deep interest in a particular topic or who have particular skills in coding, analysis, scouting out data, design or data-storytelling who will work with a team to guide them through a data-based investigation. 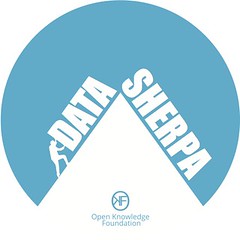 The Land of Data is vast and largely uncharted and you, brave explorer, find yourself heading an expedition to mount its peaks. Like sherpas on real expeditions, the guide plays an essential role in keeping an expedition on track.

The guide ensures that no-one gets stuck in dead ends, snowed under avalanches (of data or email) and sees that their team makes it to the peak.

This document contains handy tips and tricks for keeping an expedition on track. For more information on expeditions themselves, take a look at the Data Expeditions Page.

The Guide is an important role in data expeditions. While most of the
expedition is shaped by participants the guide will add to the success and
experiences of the group. As a Guide you will have numerous
responsibilities:

How to become a guide?

There are two types of data expeditions: online and offline. There are no minimum requirements in terms of skill levels, though a background in the area you are exploring or some experience in working with data will help. The only minimum requirement is that you can commit to the expedition for it’s whole length – so as not to leave your expedition partners stranded up the mountain!

To propose an online expedition, simply suggest your proposed topic on the School of Data mailing list or contact us directly (schoolofdata [at] okfn.org) for help in organising it. 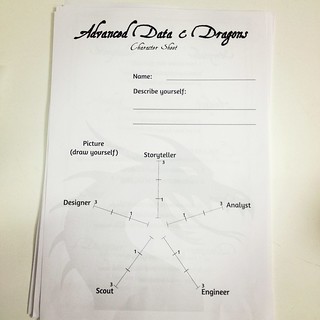 For offline expeditions, a lot of the same guidance applies to online expeditions. In addition, we’ve put together a simple pack to help you form the groups and identify roles. It’s based around the role-playing game “Dungeons and Dragons” (D&D) (in case you were wondering what the picture of a dragon was for). In online role-playing games like D&D, the importance of having clearly defined roles is paramount, that’s just what we’re trying to recreate here with these sheets. 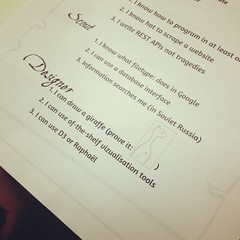 How to use the character sheets

You have your idea for the subject you want to tackle, you’re ready to roll. (Optional) You may want to devise a suitably ridiculous name for your group: our first online expeditions ranged from “the Resourceful Puffins” to “the Hardworking Aunts”… You should also name your expedition (Bonus points for ridiculous puns revolving around online gaming).

Your next tasks will fall into the main phases of the expedition.

Phase 1: Getting set up and recruiting

If you are running an online data expedition, it is very important to have a way to organise your group online and communicate effectively. We suggest deciding this before signup begins (from experience, you’ll waste a lot of time if you allow your group members to debate tools – some people enjoy this debate, but others really don’t and it’s not the point of the exercise).

A note on organising groups online

All of these are methods that we have seen used to organise groups online in the past. If you have ideas for more, please let us know!

A note on time frames for online expeditions

Decide on a time-frame for your expedition: how long is this going to take?

Make sure you communicate it clearly to your participants. Expeditions can range from a day to however long you like.

So far we have capped online expeditions at around 3 weeks to get a balance of sufficient time to participate and keeping momentum and energy high enough for long periods of time – but feel free to experiment!

A note on time frames for online expeditions

We did our first data expedition at MozFest in 3 hours – you may like to try doing it for longer, however make sure your session is short enough to have people’s full attention for the duration of the session and keep energy high.

A note on group size

Try to find the right group size it’s a balance between: 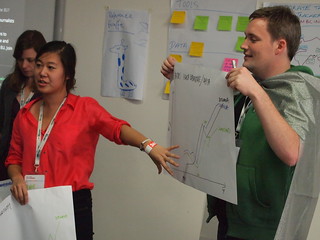 For previous offline expeditions, we had group sizes of around 8 people. For online (expecting more dropout), we chose bigger groups, between 20 and 45 people. Interestingly, the bigger groups were the ones who produced the most visible outputs but people also reported feeling less like they had a clearly defined role, while smaller groups sometimes lacked the critical mass to get off the ground.

A note on group dynamic and working together

It is important when you pick a topic that you think carefully about who you would like to participate. Some things to think about for your particular expedition:

Feedback from an expedition participant
“I am really impressed by what our group produced, but wondered if it would be possible to make future expeditions even more radical. Perhaps you could group people by those who wanted to find a particular type of solution to the problem, e.g. a super beautiful solution, an extremely nerdy solution… and tell them to push the expedition to its limits… “

A note on recruiting

You may find it helpful to have some kind of lightweight application process for your expedition. If people have to invest a little time upfront, you are more likely to get people who have enough time to put into the expedition.

The Introduction round has two purposes:
1. to give everyone an overview of the skills and people present, NOTE: don’t forget to ask people which level they think they are
2. to get everyone talking. The second one is often underrated but a good introduction round will also break the ice and help people communicate later on.

In offline expeditions, introductions can be done along with the character sheets.

In online expeditions, the introduction phase is trickier.

As the groups can be relatively large, spamming everyone with email may not be the right method. Some other methods that have been suggested were:

Now, here’s the tricky part, you need to make sure that everyone on your team has a clearly defined role. We usually let people pick this themselves. This is important both so they know where they should start, but also so they know that being present is crucial to the success of the mission. In our offline expeditions, we tried to assign people to the following categories (see the character sheet for more details): 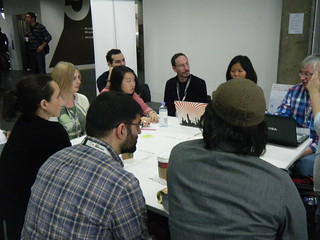 These are here just for guidance, feel free to adapt! 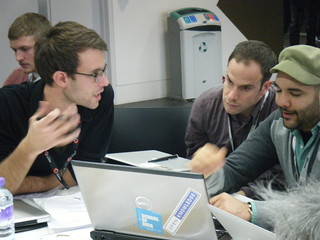 Once you have the roles assigned, you may want to give the roles brief descriptions of a few key tasks that will fall to people in each role. You obviously won’t be able to determine all of them – expeditions are necessarily unpredictable, but give people a ballpark!

Allow people to also specify a role that they are not so strong in, but which they would like to know more about, you can buddy them up with someone who is more advanced in those skills and encourage them to watch closely and ask lots of questions. This is tricky online, but encourage people to let it happen.

Introduce people to the notion of the expedition

Talk everyone through the notion of the expedition and explain their roles to them. Make it clear the aim is to produce something at the end of the session, that could be a blog post, a visualisation or a load of post-it leads – don’t specify, let them be as creative as possible!

Start the storytellers off thinking of a question and get them talking to the scouts and analysts about where they might find that data. 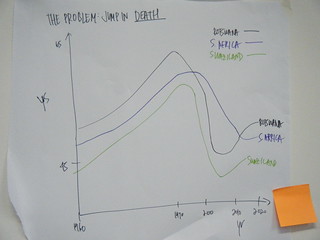 For offline expeditions, you’ll need lots of post it notes for this stage. For online – see the suggested tools above for ways to brainstorm creatively. This is one of the most difficult phases of the expedition and you’ll probably find that lots of the angles generate nothing meaning you’ll end up back at square one.

Try to put a cap on the time for this so that the other phases can begin, you can always revisit and review later.

Phase 4: Find and analyse the data…

Once the angle has been sorted, set the analysts and scouts hunting for and trying to find out more about the data. Is it possible to find data that answers that particular question? In this phase, storytellers can already begin documenting the mission’s progress ready for the final report. 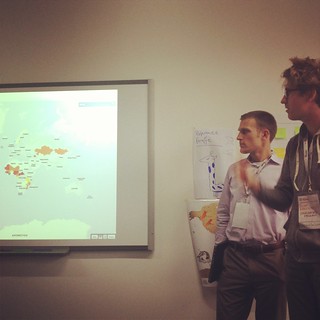 Get the designers and engineers listening in to the conversations happening and working out how it might be possible to present the information, and feed back into the discussion…Note: you may choose not to have designers or engineers – we don’t specify what the outputs of an expedition should be, storytellers may simply choose to present the story in a writeup… All of this is ok!

Get everyone to document their expedition, the avenues they tried which failed for some reason (the path was blocked), what worked, what data-sources the found and what tools they used. These are all useful for generating leads which people could follow up on afterwards and teaching people how a real data-campaign may be run.

Share what you’ve achieved! Ping @schoolofdata or schoolofdata [at] okfn.org and let us know what you did. We happily spread the word and feature the outputs on the School of Data blog! 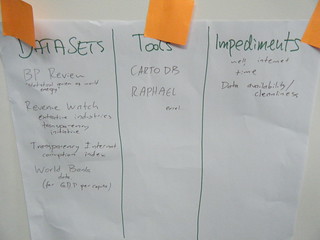 A few things to be aware of

Will there be badges or ways to recognise people for their roles in data expeditions?

Our partners, P2PU are currently working on a badging infrastructure which we will experiment with in future expeditions. Watch this space!

Absolutely! How about inviting them to kick off an expedition with an introduction to a subject? Maybe they could also be a guide, all of these are possible!

Either is possible. Adding a key dataset at the beginning of a data expedition is sometimes helpful as insurance that you’ll be able to find at least some data for the expedition. For expeditions involving beginners, it can be very helpful to know some of the common pitfalls of a dataset, such as whether the data is dirty or incomplete, so that you can guide them around it!

What is School of Data’s role in organising data expeditions?

School of Data acts as a facilitator for Data Expeditions, we can:

We’re very happy to arrange a chat to help with expeditions. Simply drop us a line via the School of Data mailing list.

If you’re planning an expedition – let us know…

… We’ll help to spread the word about it. We’d also love to hear from you on your experiences of running expeditions to help build on and improve this guide. Looking forward to hearing from you!