A gentle introduction to exploring and understanding your data

Your resistance to answering this question is futile: you’ve probably just answered it without even thinking.

We doubt it’s controversial to say that many of you taking this course have the instinct and itch to know what a column of numbers adds up to, or how the numbers are spread across the different categories in the dataset in front of you. Spreadsheets make this sort of descriptive analysis easy by giving you a kit of mathematical functions to add, subtract, multiply, divide and create averages and percentages from numbers. We think that you know how to use some of these, but if you want to brush up your skills, run through our data fundamentals course on analysing data.

However, the spreadsheet also has another powerful descriptive analysis tool called pivot tables. In a nutshell, this is what they do: 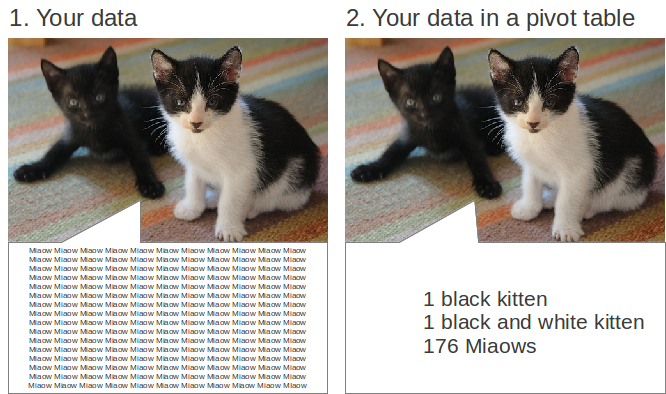 Pivot tables summarise complete datasets without you having to write formulae, create new columns, or arrange your data in any particular way. They enable you to combine data in ways that reveal the relationships that exist in the data, and show it to you in a new light. They don’t change your data, they have a stack of useful functions built in and using them effectively can cut down on a lot of repetitive tasks, saving you time.

A combination of a number of spreadsheet functions – like sort and filter, and some formulae – work in a similar way to pivot tables in that they enable you to rearrange and pull out small bits of data more easily. Pivot tables do these things for the complete dataset, and present it to you so you can see it all.

Upon completion of this course, you will:

To do this course you will require the following:

There are four sections in this course.

There are three parts in each section:

How to do this course

This course is quite short. We suggest you work sections 1 to 4 in sequence, as later sections probably won’t make much sense on their own.

Make sure you’ve got copies of the sample dataset and the GRAIN dataset on landgrabbing open in your copy of LibreOffice.

Take a look at the sample dataset about the selection of snacks on the author’s kitchen shelves. It has data about their main ingredient, quantity, and the risk they pose to the author’s health: 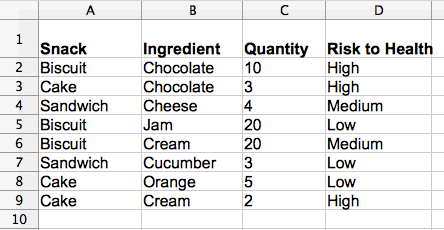 Start by building a pivot table using the data from the sample sheets:

So, what has happened to the data?

Pivot tables can be created with more than one Row Field. Using the sample dataset, let’s choose another row of data to add:

What’s happened this time? In the same way as before, the pivot table has also grouped and summarised the data about ‘Ingredients’. The great thing about this is that it has grouped the data about ingredients to show them for each type of snack. We can turn this around to give another view, from the perspective of the ingredient, not the treat.

To do this, edit the pivot table layout again (right click on the pivot table), re-order the tiles that appear as Row Fields (as shown below) to place ‘Ingredient’ on top.

Select OK to re-create the pivot table with the new layout. This is how the data in it will look: 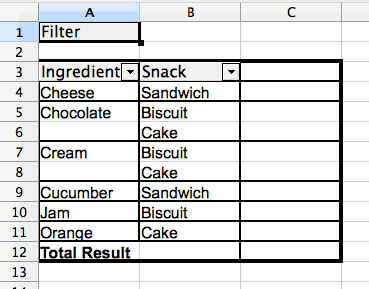 In this pivot table the groups of values are arranged in a different way. Rather than showing the ingredients that go into each snack, this shows the types of snack that contain a particular ingredient.

Got it? Let’s try it out on a larger dataset where we can see the value of a pivot table more dramatically.

Let’s try the same technique on the larger GRAIN dataset on commercial landgrabbing, a cleaned version of which you can download from the Datahub.

Spend a bit of time familiarising yourself with this dataset. A good (but more time consuming) way of doing this is to work through the School of Data course called A Gentle Introduction to Cleaning Data, which also uses the GRAIN dataset as the basis of lessons.

If you don’t have time right now, the basics of this dataset are as below:

To create a pivot table in the GRAIN dataset the steps are the same:

The GRAIN dataset has nine columns of data. In this lesson, we’ll just add different combinations of fields into the Row Fields part of the pivot table to answer specific questions.

We’ll walk through one of the questions to get you started: “In which countries has land been acquired?”

We can now build on this list to increase our understanding of what is in the dataset. For example, by editing the layout and dragging the tile called ‘Landgrabber’ into the Row Fields area, we can answer this question: “Which companies have acquired land in which countries?”

Now you’re pretty much an expert, here are a few more questions that you can answer by adding in data to the Row Fields of a pivot table. Have a go at these:

Where you see a downwards-pointing triangle in the top row of a pivot table, click it to activate the sort and autofilter features of the spreadsheet. Click on them to bring up the interface and have a play around with it to see how it affects the data in the pivot table.

In Section 1 we tried out building sorted and grouped lists that can use your data to answer questions. But what else can a pivot table do? In this section we’ll look at how the ‘Data Field’ part of the pivot table works.

Build a pivot of the different types of snack again, as outlined in Section 1 above. This time however, we’ll add in a “Data Field” that will calculate how many of each type of snack there are: #. Your pivot table layout should look like the image below: 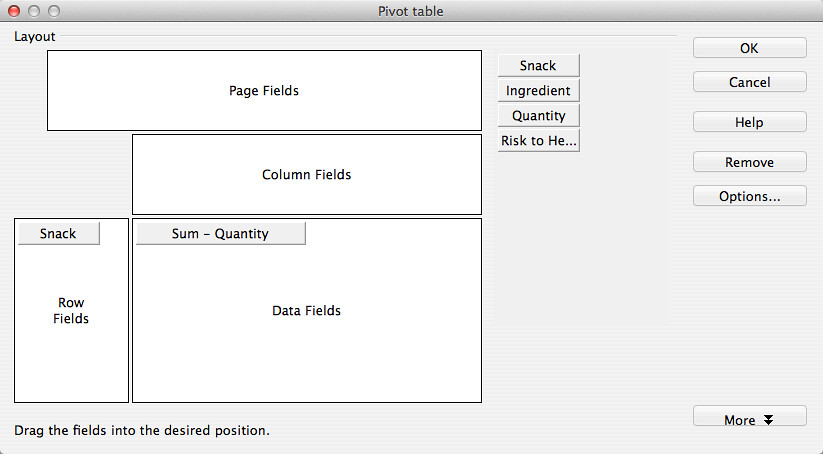 The pivot table has grouped and summarised the data on the types of snacks, which you put into a Row Field. The data on the quantity of snacks – which you put in the Data Field – has been added up to create a total for each type of snack. Neat, huh? Let’s add in another Row Field, just as we did in Section 1, and see what it tells us:

We can apply the same steps to the GRAIN dataset on landgrabbing to create more useful summary views of the data. For example, let’s find out how much land was reported as being acquired in each country:

As before, we can continue to ask questions of the data by adding in different Row Fields. The data above shows the amount of land acquired in each country. Add in ‘Status of deal’ as a row field to refine this picture even further and show which deals are done, in process, proposed and so on.

Bonus features: change which aspects of data are shown

The fields that you add to pivot tables have two useful features you should know about. We’ll give a workthrough below, but here’s an overview:

Here’s an example pivot table layout that demonstrates both these features.

In the previous sections, we looked at how to add row fields and data fields to your pivot tables. We also looked at how to sort and filter data in pivot tables, and how to adapt the display of data to pick out the largest and smallest values in a list. In this section, we’ll add the final basic component: Column Fields.

After building nearly 30 pivot tables in this course, we’re sure you’re now getting the hang of this. The next step is to choose the data that can be a Column Field in your pivot table.

The effect of adding the Column Field is to further sub-group the data. Here’s the original pivot table from Section 2, so you can see the difference: 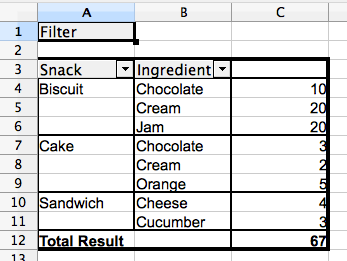 The version that includes columns enables you to see at a glance which the high risk snacks are, what they are made of, and how many of them there are. Better avoid chocolate biscuits and cream cake!

Returning to the GRAIN dataset, we can see how adding this final dimension affects how the data is shown.

The effect should be quite predictable for you by now. The pivot table will give an overview of the total amounts of land acquired for each country, broken down by the status of the deal:

The ‘Status of deal’ field is a fairly convenient field to add to the Column Fields area. When summarised by the pivot table it has only five distinct categories. This means it fits easily into the screen area! Something like ‘Production’, which has over 100 categories, would not be as easy to view.

Have a go at changing the layout of the pivot table whilst keeping ‘Status of deal’ as a column:

As we noted in Section 1, the sort and filter features of the spreadsheet work in pivot tables. Another useful feature that operates in pivot table data is the standard filter. We can use this to exercise far more control over what data is displayed in a worksheet, and in pivot tables. Let’s see how it works.

You can chart data that is produced from a pivot table. Having both a summary of the data, and a chart is a way of further exploring and coming to an understanding of the data you have. Using the GRAIN data, here’s a simple example of how it works.

Once again, create a basic pivot table which shows the amount of land purchased in each country: drag ‘Landgrabbed’ into the Row Fields and ‘Hectares’ into the Data Fields. Here’s a sample of how the data will appear: 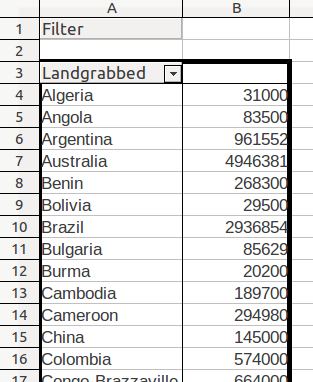 First, sort the data so the largest land deal is at the top of the list:

Third, refine the chart to show only the 10 countries where the most land has been acquired:

Try to create a pivot table with a chart showing which investors have acquired the most land.