You are browsing the archive for Open Data Day. 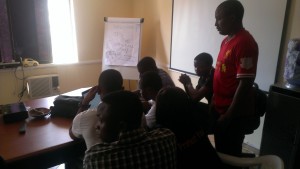 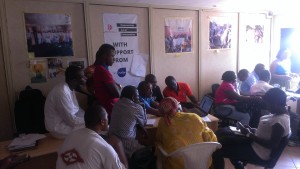 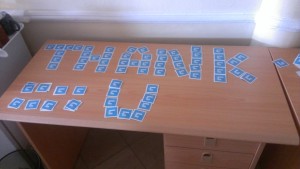 Tags: Connected Development, Nigeria, Open Data Day Comments Off on May we Fetch you Some Data Skills? Exactly, at the Open Data Day in Abuja

This post was written on Open Data Day, Saturday 23rd February about the latest data expeditions from the School of Data team in Amsterdam and Berlin. The day kicks off with a brief introduction to the world of Open Data and pitches from proposed projects.

School of Data is here and gearing up to some data expeditions. It’s handy that the first part of the day, teams have been working on completing the Open Data Census, which this year has been extended to include city-level data.

Berlin storms ahead and is the first city to complete the census, partially because we have representatives from the City of Berlin to help with some of the answers.[1]

Kicking off with the census was a great way to get people familiar with what data was out there in time for some data expeditions based upon that data to start….

So what did the groups get up to?

If you’re not familiar with the notion of data expeditions, they are investigations in to the world of data. We help to set the topic, map out the phases (providing guidance as ‘sherpas’) and assign roles (we need, designers, storytellers, engineers, analysts and scouts) but the groups are entirely responsible for their direction and outputs. Here’s what they got up to on the day…

[We created] an online app to check available health and safety inspection data against available listed restaurants in Berlin so that a user can make an informed decision which establishment to frequent.

Currently there are only two data sets to compare and only in one region of Berlin due to the method of gathering the data. There is a full spreadsheet available on request which we will attempt to ingest at a later date. We are also considering being able to select establishments by street, food style (Oriental, German, Italian, American etc) depending on available information.

We would really like to mash against Qype reviews as well as by Health Statistics (specifically food poisoning!) to see if some areas are more ‘poisonous’ than other areas. In much the same way as Cholera sources were discovered in London in the 19th Century by Dr John Snow.

You can check out our app online.

Other members of the team thought hard about how to present the information in such a way that people would understand it and went for a highly artistic solution to the problem. Using a graphics programme and a tablet (now, that’s preparation, bringing along a tablet!), Astrid took on the challenge of presenting the data as artistically and accessibly as possible and sketched out possible ways of slicing and dicing the data, contrasting it and comparing it in space. (Note: these are hypothetical ways data could be presented and not based on real data.) Another member, of the team, Kate McCurdy experimented with R and graphics packages to quickly get other angles on the data. Some fascinating data experiments came out, showing for example, which roads have only clean restaurants, and from which ones it may be riskier to walk into off the street without a recommendation… Group 2: How Number of Sports Facilities Influences the Physical Abilities of School Starters in Berlin

In the graph below, the diameter of the bubble reflects the number of children in a particular region, while the further along to the right a bubble is, the higher the percentage of school starters with conspicuous(ly low) (auffällig) Hand-Eye coordination…

Of course, we acknowledge that correlation does not equal causation, but the downwards trend does suggest some interesting patterns. Is it true that the fewer sports facilities, the lower the Hand-eye coordination of the children in the area? See the raw data and other slices and dices on it here.
#Data Expedition in Amsterdam

Ten energetic volunteers joined a Data Expedition dedicated to exploring tax havens, letterbox companies and the distinctive tax scheme known as the Dutch sandwich. The expedition began with a tour around some of the public data available on Dutch tax payments and company registrations.

Querying away for Dutch companies at OpenDataDay @Waag

During the expedition the team also received a few neat research tools from one of the leading tax evasion experts.

From the initial discussions two ideas were explored:

Keen to know when the next data expedition will be launched? Join the School of Data Announce List and we’ll keep you informed when the next ones are coming up.

[1] (Note: the census details are completed to the best of the knowledge of the volunteers based on the data we could find on the day).