Having followed the first part of the Getting Smart with Spreadsheets module.

Let’s continue our journey into spreadsheets. If you already know how to use basic formulas and make use of pivot table wizards, you’re already in a great shape for working with data. But sometimes, you need to be able to work with the data more directly.

In this tutorial, you’ll learn how to make use of rather more complex formulae, including how to join data from multiple spreadsheets into a single sheet sheet as well as how to run database like queries over the data contained in a single spreadsheet.

The spreadsheet we’ll be working on contains the education budgets for local councils in Tanzania (in Tanzanian shillings) and information from the census about the population living there. We want to bring the two sheets together to create a single source of information that will allow us to look at how much money is spent per-person in each region and then compare these numbers to see whether there are any noticeable regional differences.

If you inspect both of the sheets in the example spreadsheet file, you should notice that the names for the councils are presented in slightly different ways, although we shall presume that they refer to exactly the same areas. The budget sheet has a single column that contains both the name of a council as well as the region is it based in, such as “Arusha MC, Arusha”. The census sheet has two columns, one describing the region, and the other the council name. But the differences do not end there: the same location may also be given slightly different names: the census location “Arusha City”, for example, rather than the budget labelled “Arusha City”. (We need to take care when areas named in slightly different but we assume them to cover the same area: they may actually refer to slightly different regions on the ground. In an ideal world, data sets would include unique and unambiguous identifiers so that we know exactly what each data element refers to and that the data in one sheet referring to location XYZ123 is referring to the same place identified as XYZ123 in another sheet.)

Assuming that we can reliably and unambiguously map from the names in one sheet to the names in another, we need to work out a method that allows us to do this. We could do it by had, but it might take a long time – and be subject to all sorts of human error – if the dataset is large one. Instead, we’ll try to automate the process by using a combination of formulas.

If you’ve ever calculated the sum of values in a column using SUM() or found the average (mean, or median) values, you’ve used a formula. But did you know you can combine formulas, by feeding the result of one formula into another? We’ll do this in the next walkthrough. 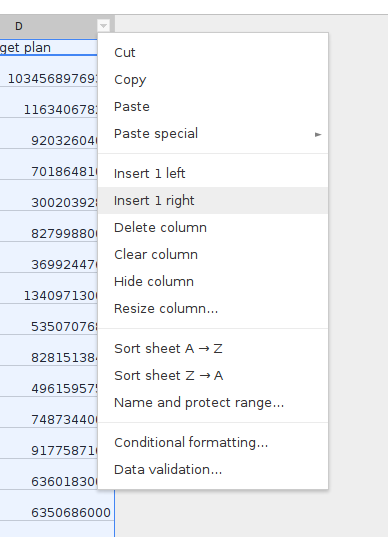 What happens is here is the following: if in the cell C2, there is the word “MC”, replace it with the word “City”.

Note the order: =SUBSTITUTE(CELL,"FROM THIS","TO THAT"). (Some programming languages may refer to this as replace). If you try this out you’ll see how it works: nothing will change with cells like C2, where the word MC is not present, but two cells below, “Arusha MC, Arusha”, as found in cell C4, become Arusha City, Arusha.

What happens here is the following:

All you need to do now is to think of a way to appropriately name the columns.

Next we need to get information from one sheet to the next sheet – get the population counts into the budget sheet to be able to calculate spending per citizen.

To do this we’ll use a new formula called VLOOKUP – VLOOKUP helps you retrieve related information from other sheets and associate this information with the right row.

Note: We assume here that the same council name does not appear in more than one region. In the general case, you should be really careful about assumptions you make when matching items, which is why we prefer matching on proper, unique identifiers. The longer the matched item (for example, council + region) the more likely the item is to be unique. However, the longer the matched item, the harder it is to get an exact match. For example, “City, Region” would not match “City , Region” because the second element contains a space before the comma that does not in the first.

Let’s quickly recap on what you’ve learned so far: you’ve seen how you can combine several Google Spreadsheets formulas by placing on inside the other, in this case by placing one SUBSTITUTE formula inside another, and then both of this inside a SPLIT formula. The innermost formula runs first and then passes its results to the next formula up that contains it. We could alternatively have used each formula within a new column in turn, with the next formula in the chain working on data from the previous column, but taking such an approach may clutter our spreadsheet needlessly. (Such an approach does, however, show your working at each step, we can be useful if an error ever crops in to your spreadsheet!)

You also learned how to use the VLOOKUP() formula to combine data from two separate sheets that share a column column. It did not matter that the order of the rows was different in the two sheets – the VLOOKUP formula was able to take each cell value from the column in the first sheet and then look up the same value in the second. The value the was returned was the value of a the cell in a specified column from the matched row in the second sheet.

As well as using spreadsheets as a tool to manipulate data, for example, by splitting columns or combining data from different sheets into a single sheet, we can also use Google spreadsheets to run simple database like queries over the data set.

The School of Data course (An Introduction to SQL Databases for Analysing Data) gives a more complete introduction to making queries of data in a simple database using the SQL query language, but it’s worth noting that Google spreadsheets can also run queries written using a very similar language.

Queries are written using a query that is contained within a QUERY formula.

For a full reference of query language commands, see the Google Visualiastion API Query Language Reference documentation. For an introduction to writing SQL like queries in general, see the School of Data course An Introduction to SQL Databases for Analysing Data.