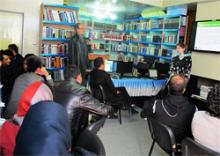 During a training workshop held by Internews, Afghan journalists immediately saw the potential of data journalism to combat corruption, and wanted to jump right into ambitious investigative topics such as tracking foreign aid budgets and political and business interests in the mining sector.

Internews trainer Eva Constantaras introduced 13 senior journalists to skills such as finding public-interest angles in government and NGO data, analyzing election results using Excel, and visualizing data with Google Charts. The training marks a first step towards a more advanced, data-driven media sector in Afghanistan that facilitates greater governmental transparency and accountability. While the training focused specifically on election data, the skills are widely applicable to coverage of a range of pressing development issues in Afghanistan. Over the course of the week in March 2014, trainees explored health, economic, education, and gender data through analysis and visualizations.

“Data journalism can be quite daunting for journalists because it requires such a wide range of skills, a lot of practice and teamwork,” Constantaras explained. “These trainees from day one developed a list of investigative stories they wanted to pursue through data, which provided motivation as they struggled through a lot of the more technical skills such as writing formulas in Excel and choosing appropriate graphical forms for different data types.”

The workshop inspired one journalist in particular, Rohullah Armaan Darwesh, from the Payk Investigative Journalism Centre. Using an ACEP media civic engagement grant, Payk delivered a series of investigative reports on elections-related issues. As part of an article in this series on the rising cost of weapons in the build up to the April elections, Darwesh utilized his new skills to visualize the 30% rise in gun prices and the importance of security as an election issue for Afghans.

“Data journalism helps journalists show and explain their research and reports in a better way in less time,” said Darwesh. “I learned that a reporter can [use comparative charts] without the support of a graphic designer… My work used skills I learned from the data journalism training workshop.”

While available data is currently limited in Afghanistan, it is hoped that data journalism and the public’s demand for investigative reporting will accelerate the open data movement there.

← From idea to story: planning the data journalism story
Investigating crime and corruption with maritime databases →

Eva Constantaras is the Internews Data Journalism Advisor in Kenya and a Google Data Journalism Scholar. She is focused on cross-border, collaborative data journalism projects that work with local journalists in regions with low data literacy and limited data access to increase transparency and accountability.