A Weekend of Data, Hacks and Maps in Nigeria

It was another weekend of hacking for good all around the world, and Abuja, Nigeria was not left out of the weekend of good, as 30 participants gathered at the Indigo Trust funded space of Connected Development [CODE] on 12 – 14 September, scraping datasets, brainstorming creating technology for good, and not leaving one thing out – talking soccer (because it was a weekend, and Nigeria “techies” love soccer especially the English premiership).

Participants at the Hack4Good 2014 in Nigeria

Leading the team, was Dimgba Kalu (Software Architect with Integrated Business Network and founder TechNigeria), who kick started the 3 day event that was built around 12 coders with other 18 participants that worked on the Climate Change adaptation stream of this year #Hack4Good. So what data did we explore and what was hacked over the weekend in Nigeria? Three streams were worked :

Looking at the three systems that was proposed to be developed by the 12 coders, one thing stands out, that in Nigeria application developers still find it difficult to produce apps that can engage citizens – a particular reason being that Nigerians communicate easily through the radio, followed by SMS as it was confirmed while I did a survey during the data exploration session. 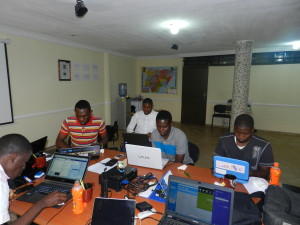 Going forward, all participants agreed that incorporating the above medium (Radio and SMS) and making games out of these application could arouse the interest of users in Nigeria.  “It doesn’t mean that Nigerian users are not interested in mobile apps, what we as developers need is to make our apps more interesting” confirmed Jeremiah Ageni, a participant.

The three days event started with the cleaning of the water points data, while going through the data pipelines, allowing the participants to understand how these pipelines relates to mapping and hacking. While the 12 hackers were drawn into groups, the second day saw thorough hacking – into datasets and maps! Some hours into the second day, it became clear that the first task wouldn’t be achievable; so much energy should be channelled towards the second and third task. 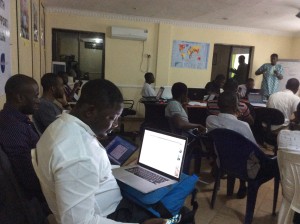 Hacking could be fun at times, when some other side attractions and talks come up – Manchester United winning big (there was a coder, that was checking every minutes and announcing scores)  , old laptops breaking (seems coders in Abuja have old  ones), coffee and tea running out (seems we ran out of coffee, like it was a sprint), failing operating systems (interestingly, no coders in the house had a Mac operating system), fear of power outage (all thanks to the power authority – we had 70 hours of uninterrupted power supply) , and no encouragement from the opposite sex (there was only two ladies that strolled into the hack space). 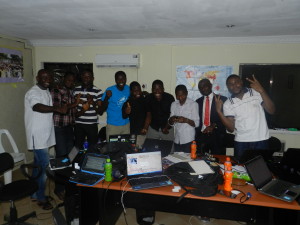 Bring on the energy to the hackspace

As the weekend drew to a close, coders were finalizing and preparing to show their great works.  A demo and prototype of streams 2 and 3 were produced. The first team (working on stream 2), that won the hackathon developed EMERGY, an application that allows citizens to send geo-referenced reports disasters such as floods, oil spills, deforestation to the National Emergency Management Agency of Nigeria, and also create a situation awareness on disaster tagged/prone communities, while the second team, working on stream 3, developed KNOW YOUR WATER POINT an application that gives a geo-referenced position of water points in the country. It allows communities; emergency managers and international aid organizations know the next community where there is a water source, the type, and the condition of the water source. 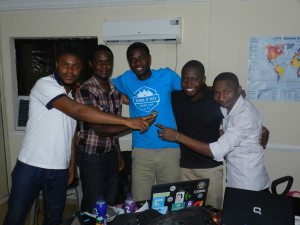 Living with coders all through the weekend, was mind blowing, and these results and outputs would not be scaled without its challenges. “Bringing our EMERGY application live as an application that cuts across several platforms such as java that allows it to work on feature phones can be time consuming and needs financial and ideology support” said Manga, leader of the first team. Perhaps, if you want to code, do endeavour to code for good!