School of Data in South Africa

“We’re definitely more aware of data in our projects, and more aware of the process. We have a clearer idea of what you want to get out of a project at the beginning, and we’re not just putting data in a spreadsheet. … Now we think about the data pipeline first — getting, cleaning and analysing the data”, Sean Russell – Ndifuna Nkwazi

Hannah Williams is a Cape Town-based designer who scored well for her overall impression, and had been exposed to the School of Data training course as a participant in a course earlier in the year where she excelled in ability and enthusiasm. She proved to be a perfect choice, and as a designer, she brought a much-needed skill to the global School of Data fellowship.

Siyabonga Africa has a great enthusiasm for data journalism, and has long been the Hacks/Hackers organiser in Johannesburg. His career has its roots in public administration and journalism from the University of Pretoria and Stellenbosch University respectively. He completed his masters in new media design at Indiana University before returning to South Africa in 2012.

Highlights of their work

Our fellows were committed to work directly with partner organisations and help them achieve concrete outputs. The selection of partner organisations was based on their work and their interest or capacity to commit to a two-day workshop and six-month programme. The organistions we worked with were: The Con, Media Monitoring Africa (MMA), Ndifuna Nkwazi, International Budget Partnership and the Social Justice Coalition who teamed up to work on a project on the City of Cape Town’s budget and Black Sash.

Initially we held two workshops in Johannesburg and Cape Town to get our partner organisations the basics they need to produce great data stories. Our fellows led the workshops with the support of Michael from School of Data and Jason from Code for South Africa. They guided the participants through a series of exercises that helped them define their product, their audience, and their implementation plans. They also ran hands-on, practical sessions on data cleaning, teaching the ever useful Open Refine, data analysis with an emphasis on spreadsheets, and specialised tools like budget tools and Wazimap.

As part of their Imali iYethu campaign NU are working on making The City of Cape Town’s budget more accessible to promote public participation (currently very low) and a more equitable budget. Currently the City of Cape Town releases its budget as a series of lengthy PDF documents so it’s practically impossible to get a clear overview of how the budget is being spent. We worked with Ndifuna Ukwazi to firstly extract the budget data from these PDFs, clean and analyse the budget data (geographically as well as according to specific local government service sectors and possibly according to other factors as they become apparent) and then present this data in a clear and understandable manner so that the public can know how their tax money is being spent in their local area and it can be determined whether the current budget allocation is equitable, and if not, how it could be improved. 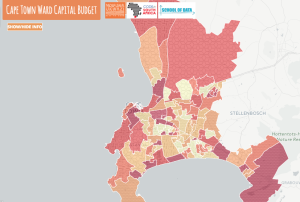 We hope that this project will encourage the City to reconsider how it releases its budget and encourage more active citizenship and engagement on all sides for future budgeting processes.

Hannah has created a map of the City’s budget, which will form an integral part of the campaign. http://capetownbudgetproject.org.za/

Making All Voices Count (MAVC), managed by Hivos, is part of a global initiative which aims to empower Community Based Organisations (CBOs) to take ownership of and participate actively in citizen-based monitoring of three government services (Health, SASSA and Local Government) in 20 service sites across South Africa. A working relationship with the Department of Performance Monitoring and Evaluation is in place to pilot the integration and institutionalisation of citizen feedback into government’s performance monitoring and evaluation system. Black Sash conducted surveys with communities around these 20 pilot sites. Their challenge was how to effectively analyse and present this data in a manner that promotes dialogue between communities and service centres so that poor areas of service can be improved and good service acknowledged. As these communities have a low level of internet and technology penetration we decided to use low-tech methods of communicating the monitoring data to them.

Hannah turned that data into posters, using a simple design language, so that the data can be used to promote dialogue between the stakeholders at the monitored stations. 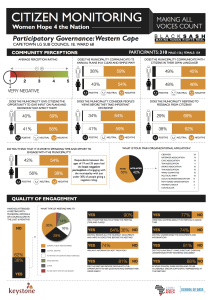 The result of the data analysis will feed into Black Sash’s Hands Off Our Grants project, which protects the poorest of the poor from having their grant payments illegally garnished.

The Black Sash project was the most successful of the projects, resulting in multiple concrete outputs, and a very happy partner who uses the project and the School of Data programme as an example of data-driven advocacy when speaking to other civic society organisations.

Agenda Setter is another project from MMA that uses Dexter as a data source. M

MA aims to match the newsmakers with publishers to see who has the most influence in the news of the day. Using Dexter, MMA plans on mining news that is published to extract the sources who are the most prevalent to see if they match up with the top Twitter profiles in the fields of business, politics and news. They also plan on using this platform to analyze the content to find which stories get mainstream attention and from which sources.

Some of the parts of the AgendaSetter application have been completed, including a visualisation of the top newsmakers in the country using Dexter data (http://code4sa.org/sa-newsmakers), as well as monitoring Twitter for the top South African journalists’ tweets (http://journotweets.code4sa.org/).

Managing a project and a fellow remotely is very difficult. Siyabonga didn’t always let us know when he was struggling, and with what, and tried to make everything seem rosy when we he needed help. If he was closer, and we saw him physically more often, I think it wouldn’t have been as much of an issue. Even though we didn’t see Hannah every day or even every week, the occasional sit-down was much more valuable than our regular Skype stand-ups. We also regularly had our Cape Town partners at our offices, often for the entire day. As a result, I feel that the Cape Town projects benefited from the entire Code4SA team, and from extra hands-on attention.

The outcome I’m most proud of isn’t a website – it’s a poster. For the audience, it is clearly the right medium, and communicates in a way that a website cannot.

Making the most of a short amount of time

Hannah suggested in her report that we could have selected the partners before the programme started, which would have let us organise the workshop much earlier. It took us until September to get through the selection phases, and by then we had very little time to produce outputs.

You’ve got to get stuff out the door

Siyabonga quotes the following from Twitter in his report: “#ThingsToLiveBy: You are judged by the work you complete, not how much work you take on”

We encouraged our participants to come up with one grand project, which was often extremely ambitious. Rather, working with data every day and using the tools every day (such as NU is now doing) creates a much greater organisation change that will have long-term benefits. NU now reports that they use Open Refine extensively, and that it has saved them weeks of work.

← Learn data visualization and data-driven journalism in a real “Data Jam”
May we Fetch you Some Data Skills? Exactly, at the Open Data Day in Abuja →