Feedback from the 2016 Summer Camp: Malick 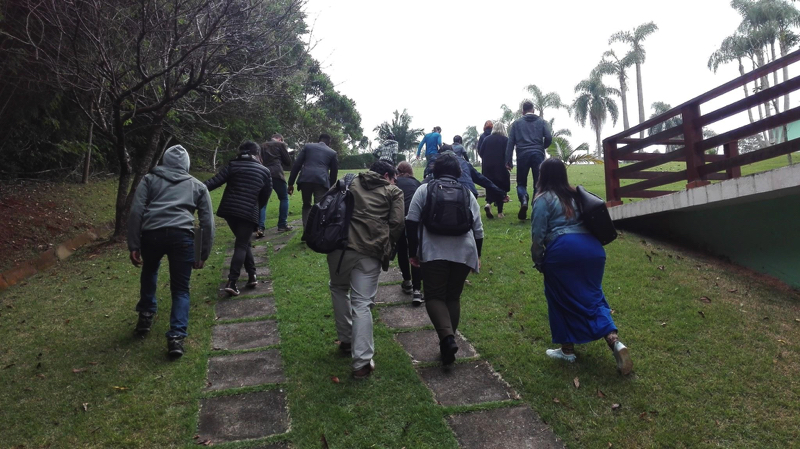 Photo: Hill climbing by the Campers, a good way to start the day

Summer Camp is the beginning of the eight-month School of Data Fellowship, where new members of the family learn from elders and work to set the goals that will govern their work in the coming months. In a private residence at Ibúina, Sao Paulo, the new data explorers found an ideal environment in which to stimulate their brains. The location was relatively quiet and entirely green, in the middle of Amazonia and next to a lake where Escola de Dados (School of Data in Portuguese) welcomed us. Despite the limited internet connection, I will say the continuous flow of great Brazilian cuisine, prepared by the most humble chefs, definitely made the camp a success. Before getting into the nitty-gritty, it is appropriate to present School of Data.

School of Data: what is it?

School of Data is a project of Open Knowledge International, launched in May 2012, which aims to empower civil society by teaching the skills necessary to use open data. The project was birthed on the fact that civil society (citizens, NGOs, journalists, associations, etc.) could greatly benefit from the power of open data but lack the skills needed to understand, analyze and utilise it effectively.

What happens at Summer Camp?

A typical day at Summer Camp began at 9:00 AM, after breakfast, with a gathering next to the lake called “opening circle”, a session designed to provide an overview of the day’s objectives. Dirk Slater, Summer Camp facilitator, lead this session in a pretty relaxed way, just to put everyone at ease and encourage the participation of all:

“What is the first thing you will do once you are back home?” – Dirk; and Kabu replied: “Find my cousin and have fun”. (Laughs…) it was on day 5; just imagine?

After the Opening Circle, participants dispersed to either the “Governance Track” or the “Fellowship Track.” The Governance Track gathered mentors who have the task to work on the governance of the organization, make last year’s review, set new goals and elect the new Steering Committee. I participated in the Fellowship Track in which we worked to set our fellowship objectives. 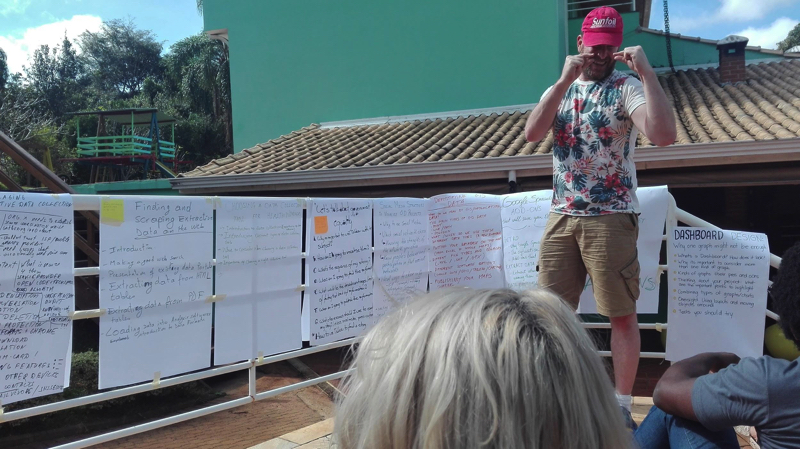 Photo: Paul explaining his objectives to other Fellows and mentors

Overall, each of the Fellows will work to promote the use of data by journalists, CSOs and other interested parties by communicating and organizing training sessions, and also by producing online training modules, tutorials and blog posts. In doing this exercise, we were also assisted by experts in the topic in which we will be promoting the use of data. To recap, the topics for this year are: extractives, health, ethical uses of data, data journalism and gender issues.

In a second step, we worked to determine the tasks and scheduled them in order to achieve our objectives. Here, David reminded us that we have just 10 days a month for our Fellowship work and, because of this, we should avoid scheduling important activities successively, in one month. 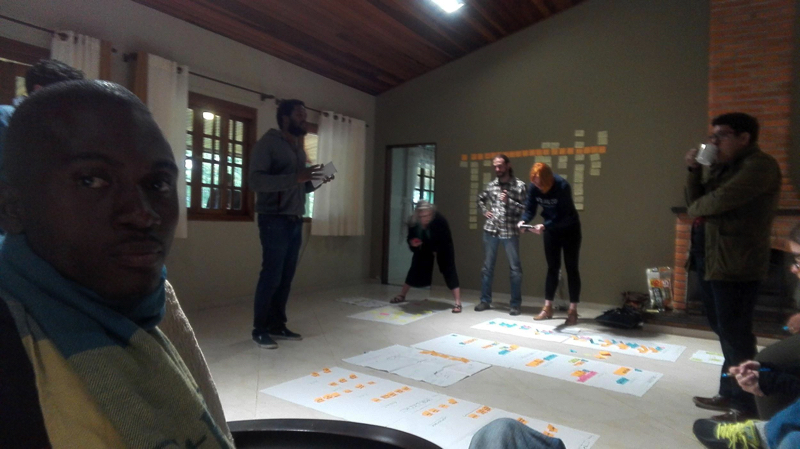 Topic experts also assisted us in this phase. My topic is Extractives and Katarina from Natural Resource Governance Institute (NRGI) helped me identify workshops and conferences in which I could participate as a Trainer or Speaker.

During the afternoon, we shared our experiences of data-literacy activities. Every day, 2 sessions were held during which 5 workshops were ran simultaneously. I learned some socio-economic and environmental analyzes on EITI data of some African countries. Katarina facilitated this session. 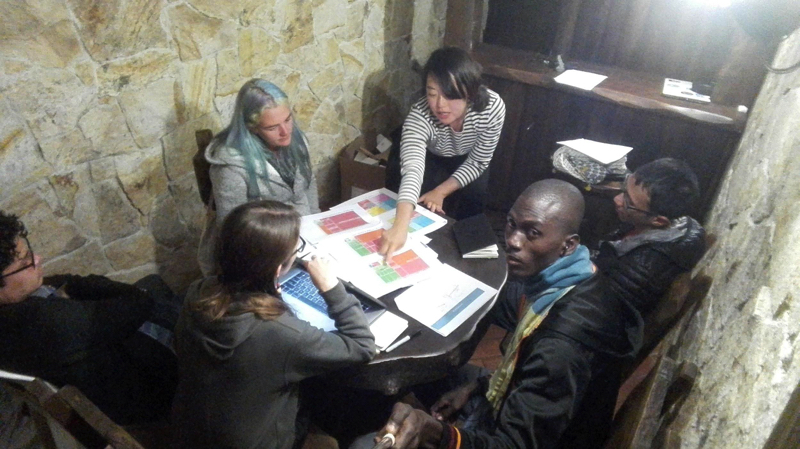 Many other sessions have hugely enriched me during the five days of Summer Camp. Among others, there were:

(The Data Literacy Pipeline I found on a wall, by accident). 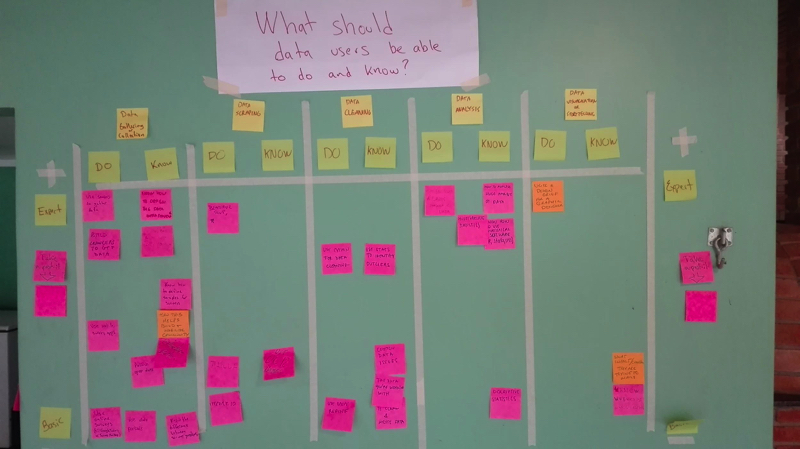 Around 7:00 p.m., came the “Closing circle”, a moment to make a brief review of the day. Dirk asked everyone to give their most remarkable experience of the day, including the difficulties they may have encountered. The ‘Closing Circle’, is also the moment when surprise announcements are made. I remember particularly when Marco announced on May 20th that we will have a party that night. Samba, Tango and Salsa were the highlights of the dancefloor. Yes, that’s also part of the SCODA Camp (School of Data Camp). Another flagship announcement was the program of the Conference of Data Journalism of Brazil, to be held on May 21st.

The #CODA-BR: The Conference of Data Journalism of Brazil

On the evening of May 20th, we left the camp, the green paradise. Three hour drive to reach the metropolitan city, Sao Paulo. We alight with our suitcases in the center of this city, which is the symbol of the emergence of Brazil. Our friends from Escola de Dados carefully arranged everything. On May 21st from 9:00 a.m, we were gratified with a rich and memorable conference. Experiences of data journalism in Brazil and Latin America were shared in plenary sessions. 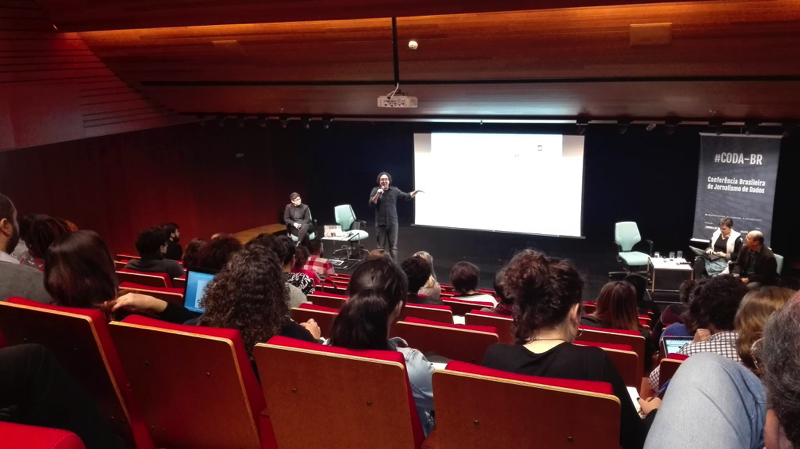 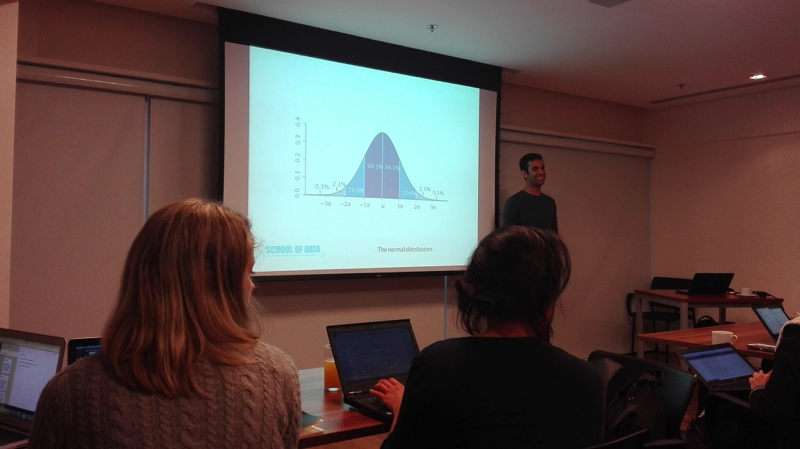 Photo: Data analysis for journalists with Google tools by Marco.

#DataViz with D3.js She talks in Portuguese but it's clear enough for everyone. #PowerOfCode #CODA-BR pic.twitter.com/Hafxsc84BH

I left the Summer Camp filled with confidence that our contribution, as modest as it may be, to a more “Data-Literate” world will spread like wildfire. I must give back this knowledge to my community as prescribed. So, it is with pleasure that I will work with journalists, CSOs, students and researchers to advance Data Literacy back home.

← Data Journalism in Turkey: still a new topic
Reflections from the field #1: It’s not enough to do great work. Talk about it →