Using the procurement process as a lens for assessing audit reports: what to watch out for 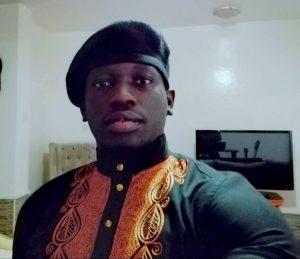 Odanga Madung, our 2018 Fellow, was fortunate to collaborate with the Institute of Economic Affairs in Kenya on their recent study into public procurement. In this article, Odanga reflects on his experiences and offers some tips for those tackling similar work.

The Institute of Economic Affairs (IEA) in Kenya recently carried out a study entitled ‘Public Procurement in Kenya: An Analysis of the Auditor General’s Reports’. I was fortunate enough to contribute as part of my fellowship with the School of Data.

The Auditor General’s Office (OAG) was established in Kenya in 2004 under an Act of Parliament. Its aim is to provide independent oversight over how the Kenyan Government and its agencies spend taxpayers’ money. The audit process involves obtaining the accounts of a government entity, scrutinising them against proposed budget plans and contractual obligations, then providing a professional opinion on the state of the accounts. The OAG opinions consist of three types:

The IEA’s study looked at the Auditor General’s report through the lens of public procurement. They analysed the OAG’s reports by using the OC framework of the tender process, i.e. placing each violation in either the Pre Tender, Tender or Post Award stages. As a result, it highlighted what steps are often breached when the OAG does not give an unqualified opinion to a state entity’s accounts. 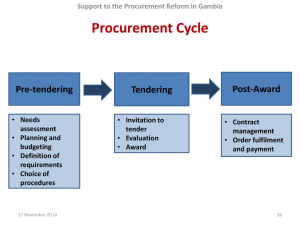 This was a much needed breath of fresh air in the corruption conversation that Kenyans are currently having. Mainly because it focussed on the how (the methods) rather than the what (numbers, figures and personalities) of corruption. I say this as corruption is not something that just happens, it is engineered.

The main finding of the study was that majority of procurement breaches tend to happen in the post award stage. A process that the IEA states often lends itself to the least public scrutiny and transparency in comparison to the other parts of the tender process in Kenya. This is very important in the Kenyan context because at the heart of the corruption problem in Kenya is the Tender process. However, very few Kenyans understand what it looks like. Few Kenyans also understand how the Tender process is used in the plunder of public funds.

The reason the problems in the above paragraph exist are twofold:

IEA’s report sought to address the problems above. The points below are some key lessons learned from my collaboration:

It is important to define the professional opinions the Auditor gives and provide examples of what may lead to specific outcomes.

The Auditor General’s report is a very technical document. The majority of ordinary citizens either tend to misunderstand or have no knowledge about the content at all. Given that they are a target audience for these reports, a key task when doing the research was to define the opinions that the auditor gives in a simple manner. Providing examples as to what each opinion meant was also important. Lack of a clear definition also lends itself to misinterpretation from the press, something that may lead to unintended consequences down the line. 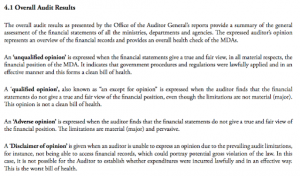 Descriptions provided in the IEA report of the auditor opinions.

For relatability, try to show how much expenditure each Opinion represents.

This gives a clearer picture to audiences about how much of public spending comes under threat due to procurement violation in specific cases.

Multiple levels of procurement breaches may occur and it may be worthwhile to highlight serial offenders.

Corruption is something that is engineered to escape the prevailing systems of accountability in a country. IEA found that many procurement violations occurred at multiple stages of the tender process. In some cases they found unsupported expenditure leading to exaggerated prices for products, or single sourcing leading to incomplete projects that have been fully paid for. It is therefore important to highlight how many violations occur at multiple levels when carrying out such a study.

Try your best to advocate for machine readability of report releases in machine readable formats to reduce errors that could be caused in transcribing.

One of the biggest hurdles experienced in working with government reports currently in Kenya (and this would probably be the case in a lot of other African countries) is that the reports are produced in the form of scanned PDFs. It makes the process time consuming and error ridden due to transcription of the documents. This problem is something that we see being widespread across government institutions. As we press for better systems of accountability, making sure that accessibility of information is easier should be part of it.

If you encounter such a problem, I would recommend using sandwich pdf (https://www.sandwichpdf.com/) to try to make majority of the text recognizable. 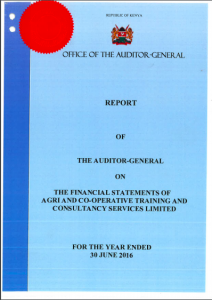 An example of one of the outputs from the Auditor General’s Office.

Media houses have a habit of misinterpreting or exaggerating the findings found in such reports. Training them and holding them accountable for their reporting is important.

Journalists and CSOs are a key conduit of this kind of information to the public. However, we have found cases where a lot of them do not understand the terminologies and reasoning contained in Audit reports. What this means is in an attempt to simplify the information for the public, a lot of it gets lost in translation. The IEA had an open forum with journalists explaining how to go about reading the report they wrote and the Auditor General’s as well.

To conclude, the IEA did an amazing study that used the Open Contracting framework on the tender process to analyze the auditor general’s report. Corruption is a problem plaguing the developing world. However, audit and oversight organisations are gaining more powers and prominence in these countries. Looking at the information provided by them could reveal a lot about how corruption happens around the world. If you do decide to undertake a study like the one IEA did, the above points I mentioned should help you come up with a study that becomes an effective advocacy tool against corruption.

← “Not a scary concept”: Reflections from the Standard Group Data Conference
Public Procurement Data in the Philippines and Where to Find It →