School of Data in Santiago: An awesome greeting from HacksHackers

Last night, Michael Bauer carried out a School of Data workshop in Santiago, Chile, kindly organised by the HacksHackers Santiago network. The workshop, based around Money, Politics and Education, attracted over 80 people to the School of Journalism at the University of Diego Portales in Santiago, and was a great success! 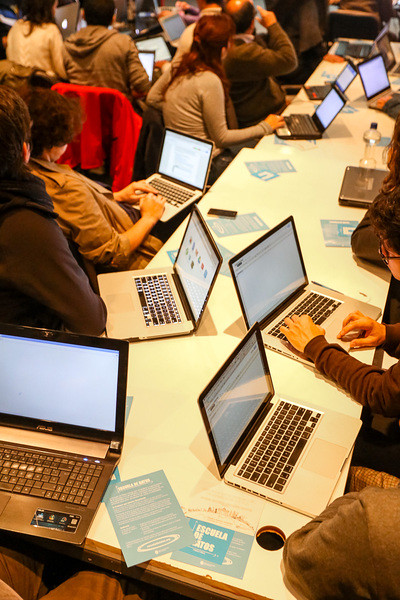 First, they looked at Ministers of Education in Chile, getting the data from a table in a Wikipedia page into a Google spreadsheet. Then (getting a little more complicated) – at the amount of money earned by people working in the Chilean President’s office, through the government portal.

And finally, they learned how to get data out of multiple tables from the same website all at once, again from the Government Portal, using Google Refine. By the end, the data was all prepared and ready to upload on to the OpenData Latino America portal, at the upcoming “Scrapaton”, to be held on June 29th in Santiago. You can see the instructions they followed online here.

Big thanks go to ICFJ Knight Fellow Miguel Paz, organiser of the Hacks Hackers Santiago network, and everyone else who organised such a great group of people to come together, including live streaming of the event. You can see photos of the event online too.

For those who attended and want to know more about the School of Data, sign up to the School of Data Latin America announcement list. And if you’re interested in finding out more about the Open Knowledge Foundation’s international activites and/or setting up a Local Group in Chile, drop Zara an email (zara.rahman[at]okfn.org)  or leave your details on this Google form.

Zara works with School of Data leading our research and learning, and the 2015 Fellowship Scheme. She is based in Berlin, and can be found tweeting @zararah.