Campaign Against Arms Trade recently hosted its first Data Hack Day, celebrating the anniversary of its commitment to open up arms trade data by inviting designers, programmers and journalists to propose data-driven disarmament projects for the future. 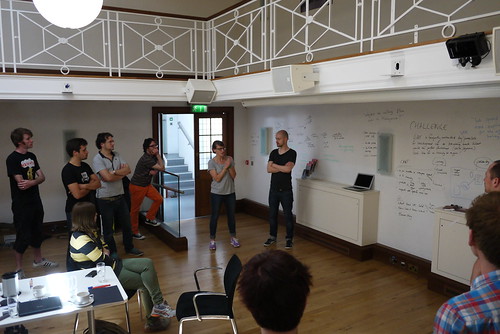 The weapons industry represents the sharp end of foreign policy. It is notoriously secretive, prone to corruption and receiving of staggeringly disproportionate government subsidy [1]. Combined with its uniquely destructive nature, it is ripe for public oversight. And citizens can only hold their governments’ actions to account if those actions are transparent and clearly presented.

Since 1998, EU member states have been legally obliged to publish summaries of the military items they approve for export [2]. While the detail and accuracy of these reports has increased slowly over time, each state uses a different system and quality varies considerably. Worse, the format of choice is still PDF, in which numeric data is stored as unstructured digits, stripped of context and difficult to extract. The volume of documents is also overwhelming.

CAAT undertook scraping of UK arms export licence reports last year. Every quarter, when new figures are released, our software requests the generation of reports through the Export Control Organisation’s web portal and downloads the results, a task which may take several days to complete. Next, a parser converts these text documents into structured, machine-readable formats. Finally, reports are cross-checked in an attempt to disaggregate licences which have been bundled together in the interests of market anonymity of manufacturers.

EU-wide reports are also published annually, though these contain only yearly totals for each member state, broken down by general category of weapons and destination country. As their format changes every year, the digitisation of this data cannot be automated to the same degree.

Once sanitised, data extracted by CAAT is published online to our export browser web applications (UK data, EU data) and as raw data through GitHub. We have always stressed the importance of making raw data accessible so as to foster reuse by other organisations and enthusiasts.

Part of this openness is an understanding that CAAT’s abilities stop at analysis and interpretation of the figures. After a year of scraping and organising we had amassed a great deal of important data, but it was clear that there was much untapped potential for presentation and visualisation. Following a chance meeting with one of the founders of Design Jams, we were introduced to the idea of a hack day and began planning an event for open data enthusiasts to get their hands on our datasets and see what they could make of them.

With the events team Artists & Engineers, we convened a hive of talent at Kings College’s Anatomy Theatre Space on June 22nd and spent a day scrutinising CAAT’s datasets and objectives, discussing successes and failings of prior art, and proposing innovative projects for both direct intervention in the arms trade and better transmission of information to the public.

Participants were invited to consider a spectrum of data presentation goals, from simplistic, attention-grabbing representations of single issues at one end, to complex, cross-referenced navigation tools for experts at the other. All of CAAT’s previous tools have fallen into the latter category, being primarily designed with staff researchers in mind, but we were especially keen to hear ideas directed more at members of the public who might not have any previous knowledge of the arms trade and related issues.

In the morning session, participants were presented with the data and, in groups, asked to discuss project ideas around six challenges – concrete data design needs identified by CAAT staff. These included: an automatable one-page summary of arms trade data on a specific country for passing to journalists when a new conflict breaks; a graphic overview of the international arms trade that could be printed as a poster to show clearly where campaigning efforts are most needed; and building connections between arms export data and other global datasets to show at a glance to which countries weapons sales are the most irresponsible. Keeping the session verbal and non-practical resulted in a torrent of great suggestions from the groups. Discussions roamed beyond the initial briefs and our designated scribes struggled to keep up.

The afternoon session was used for rapid prototyping. New groups were formed around favourite suggestions from the morning discussions and the teams were given just two hours to produce a demonstrative model. The results were necessarily simple but very well conceived. One team built a spoof shopping site as a way to make known data about arms sales more accessible, while another designed a crowdsourcing suite for matching materiel found in conflict zones with its manufacturer to show the trail of responsibility.

CAAT came away from the hack day with a wealth of designs for future data-led projects and a growing relationship with London’s open data community.

Our next challenge is DSEI, the world’s biggest arms fair, which will take place in East London in September. We’ve been steadily gathering structured data on participating weapons manufacturers and will be looking for ways to share it with campaigners and activists to help uncover and confront this deadly event.

Open data enthusiasts who are interested in exploring arms trade data are invited get in touch at data[at]caat.org.uk. Whether you’re a data journalist, a graphic designer or a programmer, CAAT is keen to help you create something amazing with our data. Whatever your skill level, CAAT has a project that you can take on to make a rewarding contribution to a safer and more transparent world.

[1]  Most strikingly, the UK employs 160 civil servants to promote military exports and just 129 for all other industries combined. For more information on subsidies, see http://www.caat.org.uk/issues/jobs-economy/subsidies/.

Ian Mackinnon is Data Wranger for Campaign Against Arms Trade.