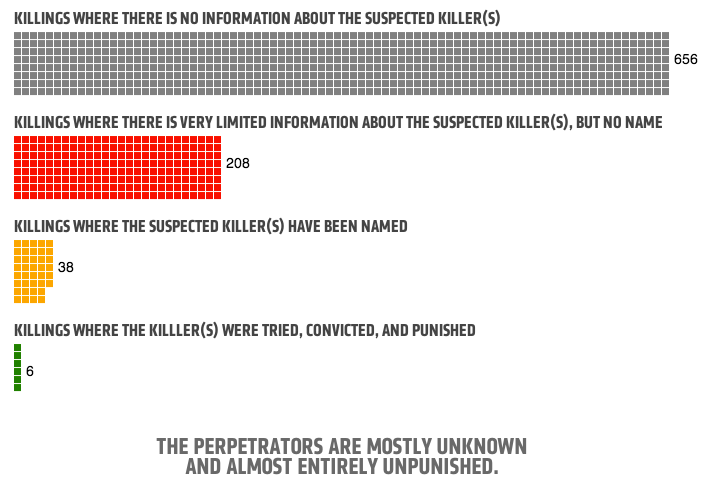 Global Witness‘s new report Deadly Environment documents the past decade’s shocking rise in killings of people defending environmental and land rights. As competition for natural resources intensifies, more and more ordinary people—particularly in indigenous communities—are being murdered for resisting land grabs, expulsion from their homes, and other abuses. These crimes are going almost entirely unpunished.

School of Data worked with the Global Witness team to develop the interactive graphics that accompany the minisite of the report. We wanted to highlight the overall acceleration of the killings, their geographical distribution, and the horrifying extent of their impunity. Conscious of the moral gravity of the project, we also sought to bring the human qualities of the data to the surface.

The result is a series of graphics developed with D3.js and presented sequentially using Owl Carousel. In the graphics that highlighted individual killings, a mouseover display of the case’s details was created using the d3-tip plugin. Geospatial data for the map graphic was taken from Natural Earth.

These interactive graphics helped Global Witness’s report reach a wider audience, particularly on Twitter, where promotional tweets including screencaps of the graphics were very widely shared.