Part 2 of our MozFest recap: check out the first blog post for our Day 1 adventures…

After our first successful session, the School of Data team went in excitedly for the second session on Day 3! The floors were packed in the morning because the organizers made the surprising decision of giving (we think everyone) who attended the Mozilla Festival a Firefox OS Flame phone. A sweet phone, which caused long queues in the Ravensbourne building.

With the sessions now in full steam, the second School of Data session was scheduled in the afternoon, and we brought a familiar School of Data format: that is, the data expedition! The theme for today session is “Analysing Data Using Spreadsheets”, and we went ahead, data sherpa style!

The theme chosen for this data expedition session was all about the re-enacting the Titanic. We provided data on the passengers of the Titanic, and from there we tried to work the data through the familiar School of Data data pipeline. We split the participants into two groups based on the operating system that they use, and then we started hacking! We started by first using a lot of post it notes to try finding questions that we could answer using the data, and after that we used spreadsheet tools such as Excel to find some answers, and last but not least, visualize those answers.

We had an interesting mix of participants in this session, with some them having already worked with spreadsheets a lot, which led to the wonderful situation where participants were teaching with other about various things such as pivot table techniques, formulae, and even the super useful but hard to notice text to column button in Excel (and we also learn new things too) – as following the collaborative learning spirit of Mozilla Festival.

In the end, this is what we made : A visualization of titanic, showing the survival rate of the passengers, separated by gender and passenger class. Really nice expedition :) 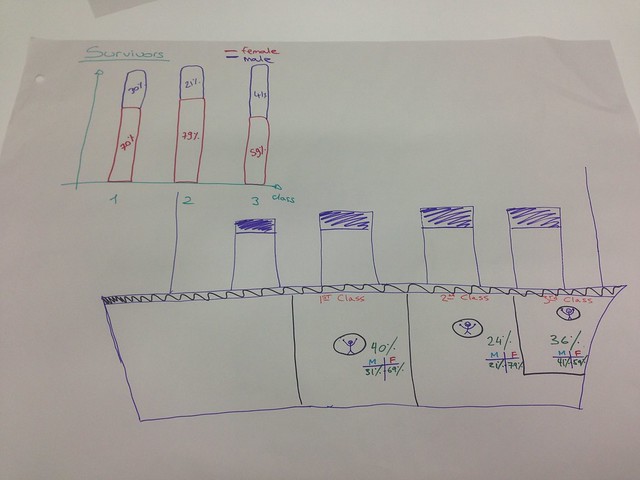