We recently had a round of training in Dar es Salaam to continue growing momentum and capacity around open data in Tanzania, which is part of a bigger commitment by the Tanzanian government to the Open Government Partnership (OGP), a global initiative that aims at promoting transparency, empower citizens, fight corruption and encourage use of new technologies to improve governance. In Tanzania this commitment covers three main sectors: education, health and water. 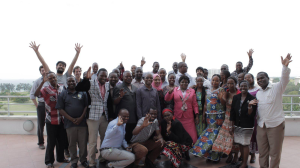 This was my first time co-facilitating a workshop of this kind as a School of Data Fellow in Tanzania. And it was a fantastic opportunity for me to sharpen my facilitation skills and also to learn from other facilitators, including the main facilitator and a more experienced among us all, Michael Bauer from the School of Data. It was a wonderful thing seeing all these government agencies responsible for education, in one room, learning and sharing from one another, which even by their own admission is very rare situation. When we were preparing for this workshop we knew that there is an existing expertise and knowledge about specific education datasets, but the challenge is mainly in letting other agencies know this so that they can be able to collaborate between themselves. It was fitting then that we had several datasets from some of the agencies that we used during our workshop to bring participants to a common understanding of open data concepts, teach and practice data wrangling skills and clean and join key datasets that some of them were already familiar with.

We started the workshop by focusing on developing a common understanding of open data and data management with concepts such as improving usability of already available public data providing better metadata and improving data workflows, to open licensing of data. Then we proceeded to introduction of various tools for data cleaning, analysis and visualization, including Open Refine, QGIS, Fusion Tables and Pivot Tables. This was the first time that most of the participants were using these tools, and they were excited to see how these tools opened up a world of possibilities that they did not know that existed with the datasets that they are working with often. An example was clearly illustrated by one participant from the PMO-RALG who was glad to have discovered Pivot Tables, as most of the tasks that he is working on most datasets would be simplified a lot using Pivot Tables skills. These practical hands on sessions were met with enthusiasm by all participants, and despite dedicating two full days, they were still up to spending more time cleaning, merging, analyzing and visualizing their datasets using these tools. 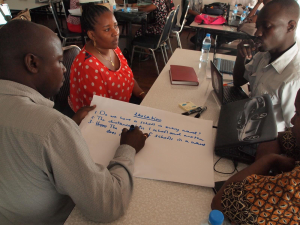 Brainstorming during the workshop

One major discussion that resonated throughout the workshop and how these agencies through working together might be able to come up with solutions about this , was the lack of unique codes that can be used to identify schools by different education stakeholders when dealing with education datasets containing schools. Most participants were of the agreement that merging data sets and coming up with analysis and visualizations during the workshop, would have been much easier, if we had unique codes used by every agency whose data sets were used during the workshop. 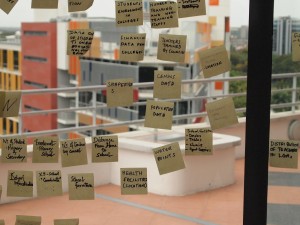 Post-it notes from the workshops

The highlight for me of this workshop was the informal discussions that participants were having during breaks in which most of them were of the agreement that Open Data initiatives need not be seen as a foreign based concept imposed on Tanzania, but rather Tanzanians themselves need to see the benefits and take ownership of this concept.