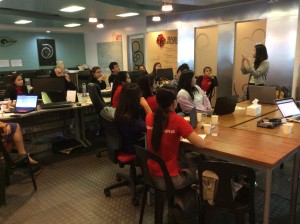 Open Spoken: Happy talks about openness and its impact in governance.

Last Tuesday (November 25), I led my first data training workshop in Manila with Sam Leon. After months of preparation, over Skype calls and shared Google documents, the workshop finally took place in a shared office space, with 20 participants from government. The participants came from the office of the Civil Service Commission (CSC) – a special constitutional body in the country created to promote morale, efficiency, integrity, responsiveness, progressiveness, and courtesy in the Civil Service. The office is also in charge of the implementation of the Anti Red Tape Act* (ARTA). The participants we handled during the session were directly involved in the monitoring of this law through a national feedback and help desk system called the Contact Center ng Bayan (CCB); and, an internal team that is in charge of surveying various local government offices and its clients (from social security, to health, to tax offices, etc.) called the Report Card Survey (RCS). The team was young, vibrant, and ready to learn – and the day was just about to start. This is hardly the image of a “public servant” in the Philippines. It was a stark difference from the typical grandstanding politician that Filipinos see in mainstream media.

The first part of the program was an introduction to Open Data through the lens of the Open Government Partnership (OGP) of which the Philippines is a founding member country. Despite being one of the first 8 signatories in 2011, it’s still not common knowledge in government offices. The OGP is still a fairly new concept, and the significance of it hasn’t been fully recognized. The implementation of the ARTA  is included as one of the commitments of the OGP Philippine Government Action Plan.

After the discussion of open data and open governance, we then moved on to the hard skills sessions of data cleaning and data visualization. Despite the technical heavy content that we were discussing, participants were very engaged asking questions and sharing stories about data protection and open data formats. They understood the seriousness of confidentiality especially in a political climate like the Philippines where reporting something may cause you harm. Government offices, for example, can give an individual a more difficult time obtaining something like a business permit if he/she files a case against a government officer in the local city hall. Given that, I think the publishing of this dataset bears so much more weight considering how some of these complaints fall on deaf ears, or worse, a failed justice system. Through the information that can be gathered from this dataset, citizens can find out for themselves which local government offices are most responsive and which ones are apathetic. By making this kind of information public, pressure from the citizenry can be applied to specific offices to change their inefficient and poor public service delivery. 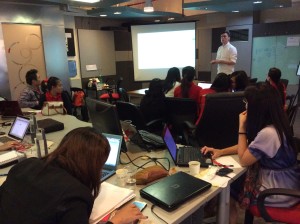 Clean Data: Sam talks about Open Refine and its many uses when handling “dirty data” 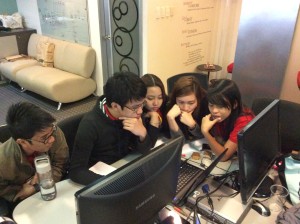 Working Break: Participants opted to work through the break to continue their data cleaning activity headed by Sam.

The same people that answer the calls of the national hotline are the same ones that process, analyze, and publish stories about their reports from the frontline. Data skills such as data cleaning and visualization can save a lot of processing time and can quickly turn into useful information for the citizens. “It’s good that we now have this common knowledge base between us. All members of the team now understand the impact of something like properly inputting data on our shared database,” said one of the participants.

To illustrate how much data they process yearly – In 2014 the RCS team surveyed 1,023 government offices and interviewed 30,690 citizens. Moreover, the CCB team processed 5,162 ticketed transactions* via SMS, calls, and online channels from 2012-2013. One of the participants approached me after and said, “If I had known about Open Refine before, this would have saved me so much time in generating reports.”

Open is an attitude. Data is a discipline.

Open Data in the Philippines exists in its own way. I found that though the datasets of the Civil Service Commission are not technically open, openness exists in the attitudes of the people who work inside the bureaucracy. The programs they have (RCS and CCB) are already done in the discipline of data-driven governance and perhaps all it takes is channelling all of that towards the global movement of Open Governance.

It will take time to digitize all our datasets and publish them in open formats, meanwhile, we can start with attitudes and making newer processes and programs that don’t rely on older data more transparent. The CCB, for example, was launched in 2012 and started with digital data collection processes. Instead of focusing on the backlog, we can choose to look forward and integrate open data in programs that are new or still to be launched. 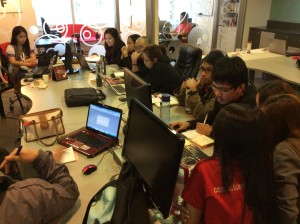 Shared Space: The group was divided into teams to work on different data visualizations given a common dataset. 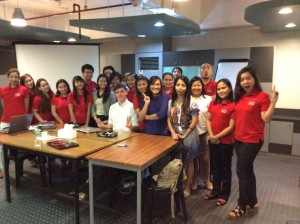 Picture-taking unites us all: If there’s one thing we Filipinos love to do, it’s this. All smiles for open data!

*The ARTA is a law that was passed in 2007 to improve the efficiency in frontline government services to the public by reducing bureaucratic red tape, preventing graft and corruption, and providing penalties therefore.
* Ticketed transactions consist of: complaints, queries, feedback, and commendations

Full Disclosure: Happy is also the co-founder of Bantay.ph – a Manila based civil society organization (CSO) that focuses its work on youth and ARTA implementation. They have been a CSO partner of the CSC since 2013 which is the basis for the selection of their office to go through the data skills workshop with the Open Knowledge Foundation.