Jamming for Data – Open Data Day in the Philippines

It was a joy to see people find people like themselves, “Met people who understand the horrors of PDF data sets and merged cells. I’m not crazy yay!” tweeted one participant. It was an even bigger joy to see people excited over the possibilities of Open Data. Though the OGP has been around in the Philippines for 4 years, the principles and ideas behind it are still not common knowledge in civil society. 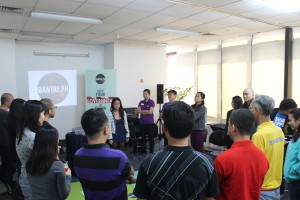 We called, they answered: From magazine feature writers, to animators, and expert programmers who do data projects for fun -the event was a good mix of diverse personalities from different sectors as well (private sector, NGOs, government). 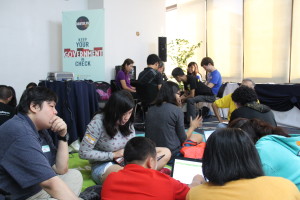 In celebration of the International Open Data Day  last February 21, we at Bantay.ph, together with our partner SEATTI, Open Knowledge Foundation, School of Data and Philippine Cyberpress conducted the very first citizen-led “Data Jam.” It was attended by people who were all interested in using their skills to find stories within a given data set and ultimately shed light on the problem of government accountability.

During the Data Jam, we opened up our organization’s primary dataset for the first time. The dataset contains findings from our citizen monitoring work on red tape in Metro Manila’s local government units. Actual survey questions and answers of on-site reports can be found in CSV format. It is the same data set used for the city scorecards published online through our website’s Red Tape Index. Users of the website can download the raw survey data of Bantay.ph and visualize it however they want. If, for example, a citizen wants to know more about how transparent processes are in different LGU’s, they can look through  the raw dataset and find answers. Moreover, if government offices themselves want to know how they are performing given a different set of indicators, they can use the dataset to help them identify their lapses.

This is a trend we hope to start with other NGOs and CSOs. There are so many valuable datasets in the development sector and if we start opening them up, we give the general public a clearer picture of our reality. This gives us a good baseline if we want to improve and change failing systems. We cannot rely on government data alone.
We’re also proud to announce that Bantay.ph now has an added feedback feature in the website that allows citizens of Metro Manila to write a review and rate their experience in a given city hall.

The 2014-2015 data set of the Contact Center ng Bayan (the national government feedback mechanism under the Civil Service Commission) was also used in the Data Jam. Participants were able to get an idea of how responsive different government offices were to complaints and grievances, what the most common complaints were in terms of government services, and the most popular mode of feedback. Government offices like the Civil Service Commission spend a lot of time processing and releasing this kind of data. The people behind the feedback mechanism are the same people who answer the hotline, encode, analyze, and visualize the data. Moreover, government still relies on mainstream media to pick up the data findings before it reaches the general public. Through the event, participants realized that by simply opening up the data set, government can outsource the analysis and visualization part to the citizenry. 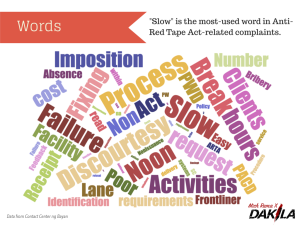 Sentiments Visualized: Mich Rama of Dakila (a local NGO) and one of the Data Jam participants, used the online tool Infogr.am to instantly create a word cloud and pie chart. 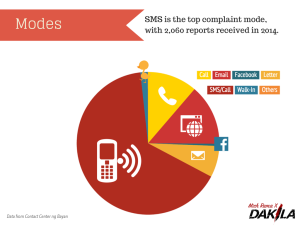 I find that the whole event was a good way to reflect on my organization’s internal process. We all have our blind spots, and by keeping things transparent, we get people to collaborate on solutions for the common good. This Data Jam also helped me see how we can improve our organization’s data collection processes and thus has given me a better insight on how to proceed strategically. When we open up datasets, we get to increase participation and engagement. Citizens are the end users of government service, they shouldn’t be left out of the conversation. We are, after all, the biggest stakeholders of this country.

During the event, data became the common language for everyone. Opinions were formed based on hard evidence instead of emotions and political agendas. In a span of 4 hours, people of different backgrounds were able to work together and help create a culture of transparency and accountability. 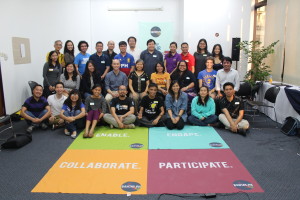 Bantay.ph is a civil society organization that uses technology to mobilize citizens to demand good governance. They want to help citizens get good government service and they do this primarily through awareness campaigns and performance monitoring of the different LGUs in Metro Manila. Currently, they have covered 9 out of 17 cities but target  to finish all of them by this year.