What was the School of Data Network up to in 2015? 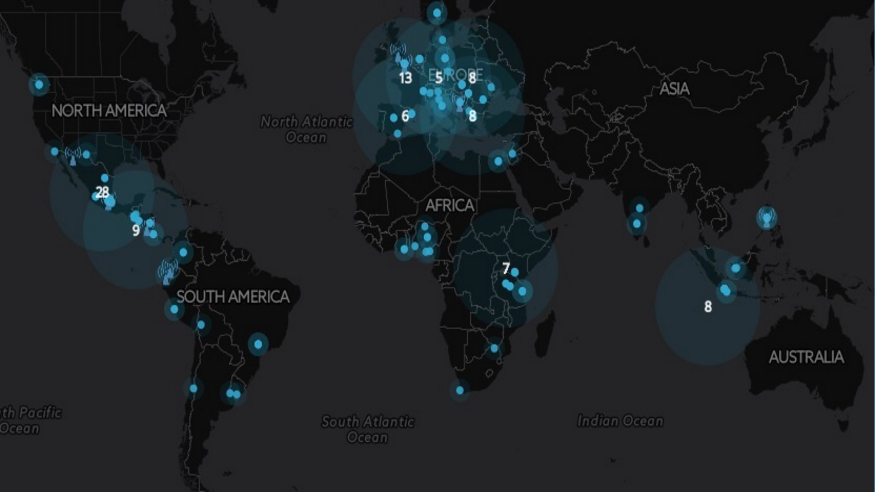 The School of Data Network is formed by member organisations, individuals, fellows and senior fellows around the world

We just can’t believe it’s already the end of the year! I mean, every year you see people saying the months passed by so fast, but we really mean it! There was a lot going on in our community, from the second edition of our Fellowship Program to many exciting events and activities our members organised around the world.

Let’s start with folks at Code4SA. They coordinated the activities of three open data fellows and are organising the first physical Data Journalism School of the continent! Isn’t that amazing? They’re actually creating a space for people to work together with on-site support on data journalism skills. This is the first time this happens in the School of Data network and we’re really proud Code4SA is taking the lead on that! But they didn’t stop it there. They also participated in the Africa Open Data Conference, coordinated trainings and skillshares with NU & BlackSash and ran two three-day Bootcamps (Cape Town and Johannesburg). “One of our biggest challenges this year has been establishing a mandate to work with the government”, said Jennifer Walker, from Code4SA. “On the Data Journalism School, the challenge is really getting everything in place, the newsroom, the trainer etc.” 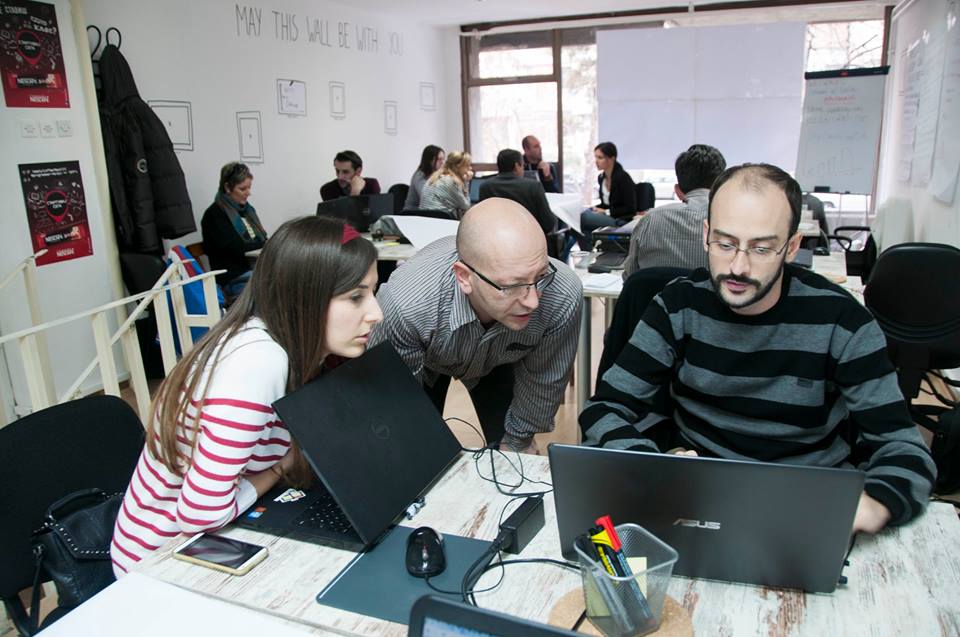 In Macedonia, this group will pursue the project of setting up the first data-journalism agency in the country (Dona Dzambaska – CC-by-sa 3.0)

In Macedonia, our friends at Metamorphosis Foundation had their second School of Data Fellow, Goran Rizaov. Together with Dona Djambaska, senior School of Data Fellow (2014), they organised four open data meetups, and two 2-day open data trainings, including a data journalism workshop with local journalists in Skopje. They also launched a call for applications that resulted in Goran supporting three local NGOs in open data projects. They also supported the Institute for Rural Communities and the PIU Institute with data clinics. And if that was not enough, Dona and Goran were special guests speakers at the TEDxBASSalon.

Open Knowledge Spain and Open Knowledge Greece also were busy coordinating School of Data in their respective countries. In Spain, Escuela de Datos participated in a data journalism conference leading workshops for three days and a hackathon. They also ran monthly meeting with people interested in exploring data; they call it “open data maker nights” and also our own “data expeditions.” They will have a couple of meeting early January to set the goals for 2016. Greece organised an open science training event and also servers as the itersection between open data and linked data, coming from people working at the University of Greece.

In France, Ecole des Données has organised three activities in Paris: a local urban data laboratory, a School of Data training and the Budget Democracy Laboratory, both for the city hall. They also developed a DatavizCard Game and coordinate a working group around data visualisation. Our French friends also took part in a series of events, such as workshops, conferences, debates and MeetUps. You can check out the list here. In 2016 they want to do more collaboration with other countries and will participate in the SuperDemain (digital culture for children and families) and Futur en Seien 2016 events. 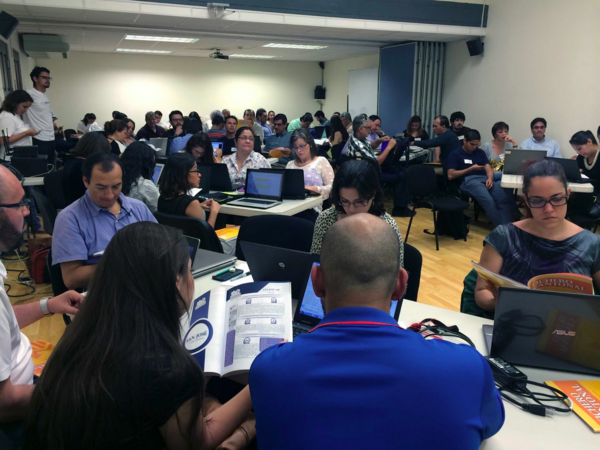 Across the Atlantic we arrive in the Latin American Escuela de Datos, coordinated by SocialTIC, in Mexico. Camila Salazar and Julio Lopez, two fellows from the class of 2015 did amazing things in the region, such as organasing 23 training events in four different countries (Ecuador, Costa Rica, Chile and Mexico), reaching out to more than 400 people. Julio is working with the Natural Resource Governance Institute on a major project about extractives data (stay tuned for news!) and Camila was hired by Costa Rica’s biggest data journalism team at La Nación, on top of developing a project about migrant data in the country. They’re on fire! You will hear more from them on our annual report that’s coming out early next year. “Our biggest challenge now will be having more trainers comming out of the community”, said Juan Manuel Casanueva, from SocialTIC. 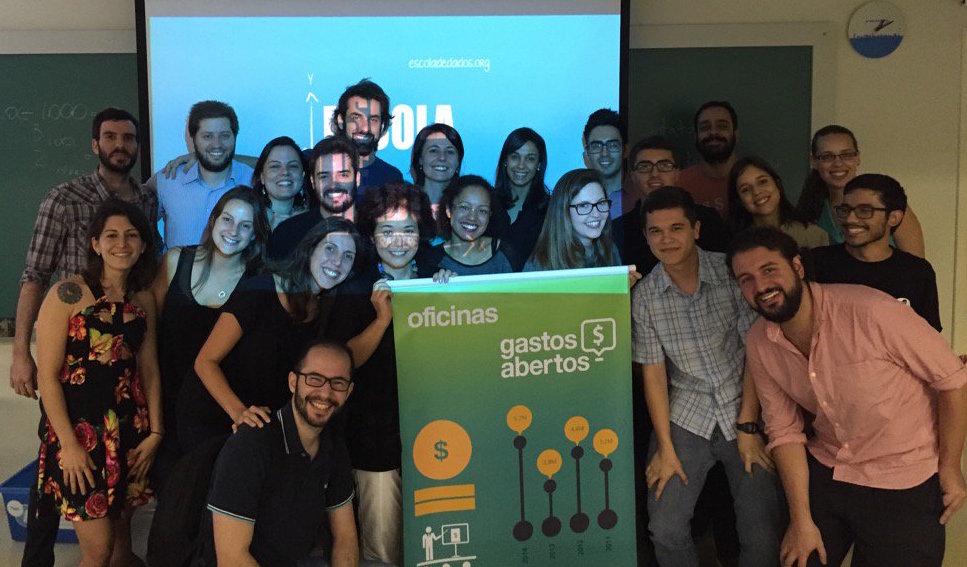 Escola de Dados (Brazil) instructors and participants in a workshop about data journalism and government spending data, in São Paulo

Heading down to South America we see that brasileiros at Escola de Dados, in Brazil, are also on fire. They organised 22 workshops, trainings and talks/events reaching out to over 760 people in universities, companies and even government agencies. Two of their intructors were invited by the Knight Center for Journalism in the Americas to organise and run the first 100% in Portuguese MOOC about Data Journalism, with the support from the National Newspaper Association and Google. In total, 4989 people enrolled for the course which was a massive success. They also organised a data analysis course for Folha de S.Paulo, biggest broadsheet newspaper in the country. Next year is looking even better, according to Natália Mazotte, Escola de Dado’s coordinator. “We will be offering more courses with the Knight Center, will create data labs inside Rio de Janeiro favelas and will run our own fellowship program”. Outstanding!

We have so much more to share with you in our annual report that’s coming up in a few weeks. 2015 has been a great year for School of Data in many, many aspects and we are eager to share all those moments with you!