2.947 civil servants will be elected next year in Costa Rica, during the upcoming municipal elections. But, are the citizens aware of what’s going on in every district? Do they know the main issues their district is facing or the way the budget been spent?

To answer these questions Abriendo Datos Costa Rica, School of Data and Social Tic organized a Data Expedition in Costa Rica. As a result 57 people from civil society (journalists, analysts, programers, designers,…) worked in teams during eight hours with the data. 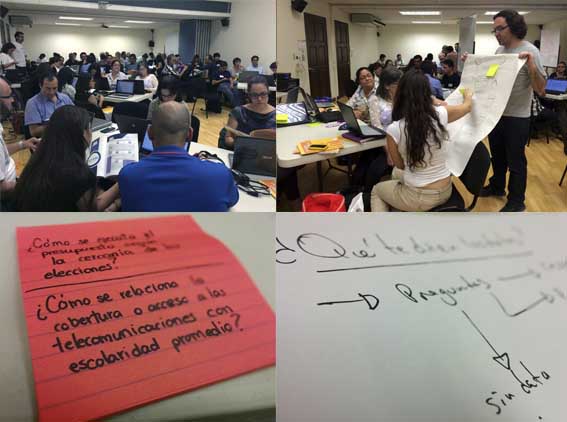 The database that was used in the expedition can be accessed here. We built it with data from the Supreme Electoral Tribunal, the National Institute of Statistics and the General Contoller of Finances.

What did the participants find?

The participants worked in ten different groups and each one tried to answer one specific question.  This were some of the findings:

During the activity the team of facilitators tried to explain the difference between correlation and causation, which was one of the most common mistakes the attendants were making when analyzing the data.

For this training we provided a database ready to use to the participants. But in the future it might be interesting to show them where where can they find public databases and more datasets to enrich their analysis.

Overall the best part of the experience was to see so many people interested in learning about how to use data, working in teams and answering questions that affect their daily lives. As Julio Cortés, one of the participants, said, the idea behind these activities is to help building a more informed society. So, we’ll definitely be planning new activities in the next months to encourage the usage of open data!

More pictures of the event here.

← Fresh faces in the School of Data coordination team!
Data journalism in the Philippines: changing the open data landscape in the country →

Camila studied journalism at the University of Costa Rica and is currently finishing her bachelor degree in Economics. Since 2009 she has worked in TV, print and digital media. In 2013 she worked in the first political factchecking project in Central America. This project was a finalist in the Global Editors Network Data Journalism Awards of 2014. Camila is a 2015 School of Data fellow.